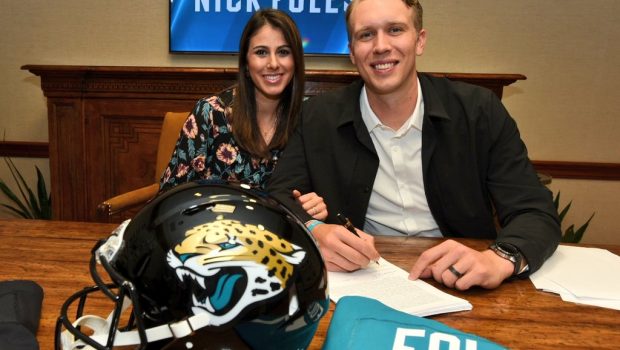 EX-EAGLE NICKY FOLES ‘GIVE THE JAGS A CHANCE,’ COACH SAYS!

Coach Doug Marrone and offensive coordinator John DeFilippo, who worked with Foles when both were with the Eagles in 2017, declared himself “really, really thrilled” about the reunion and called him a “perfect” fit for what the team wants to do offensively.

Marrone was similarly effusive about a quarterback he said has his “best days” ahead of him.

“When you make moves like that at the quarterback position, it gives the team a chance,” Marrone said. “You have someone that has the experience, someone that has leadership, someone that really has proven to some extent that he has done it on the big stage and can handle all that. With all our research … that’s one thing that he always had done well — to be able to handle pressure and a full plate. That’s one I think Nick will be challenged with and a challenge that he’ll easily accept.”

Neither Blake Bortles nor Cody Kessler gave the Jags much of a chance last season, but there were other issues holding the Jaguars back as well. If they can get a handle on those and get Foles to play like he did in Philly the last couple of years, the chances of a rebound will look a lot better.