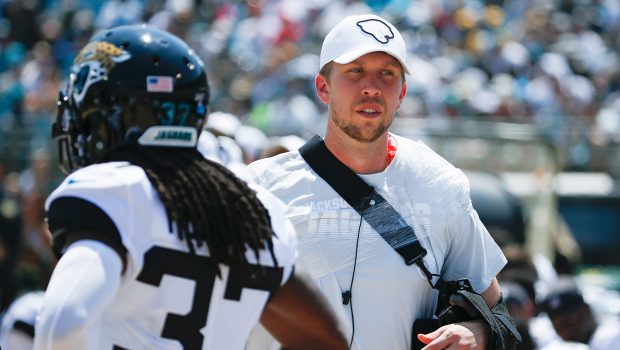 EX-EAGLE NICK FOLES LOST TO JAGS TILL WEEK 11 AFTER SURGERY!

Ex-Eagles Super Bowl quarterback Nick Foles is lost to the Jacksonville Jaguars until at least Week 11 after he had plates and screws inserted in his shoulder during surgery, Ian Rapoport of NFL Network reports.

The Jaguars signed Foles earlier in the offseason to a four-year, $88 million deal to become the team’s starting quarterback. The veteran quarterback made his regular-season debut with the team last Sunday but early in the game, the Jaguars were facing a 10-point deficit to the Kansas City Chiefs. However, Foles and the offense would respond with a 35-yard pass to DJ Chark to make it a 10-7 game.

On the touchdown pass, Foles was driven into the ground by Chris Jones as he threw the ball. Unfortunately, the 30-year-old quarterback left the game immediately after the play and didn’t return.

After the game, it was revealed that Jacksonville’s quarterback suffered a broken left clavicle and was placed on injured reserve. According to league rules, Foles can’t return to the team until Week 11—at the earliest. Foles will likely begin practicing in Week 9 but won’t return until after Jacksonville’s bye week in Week 10.