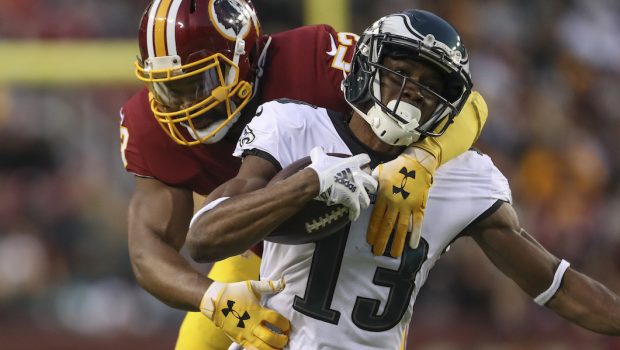 EX-EAGLE NO. 1 NELSON AGHOLOR FIGHTING TO MAKE THE PATS ROSTER

Ex-Eagle Nelson Agholor caught two passes for 52 yards in the Patriots’ preseason game against the Panthers.

With Kendrick Bourne sitting this one out, Agholor had a chance to step up with the first team.

After two straight three and outs, Agholor help get the Patriots into scoring range on their third drive, securing a seven-yard reception to convert a third down, and an impressive 45-yard reception to setup a Ty Montgomery touchdown.

With Mac Jones under center, Agholor led all receivers with three targets and an 86% snap share.

Despite rumors that Agholor could be “the odd man out” in the Patriots’ receiving room, Agholor has reportedly had a strong camp and turned in a solid showing on Friday night.