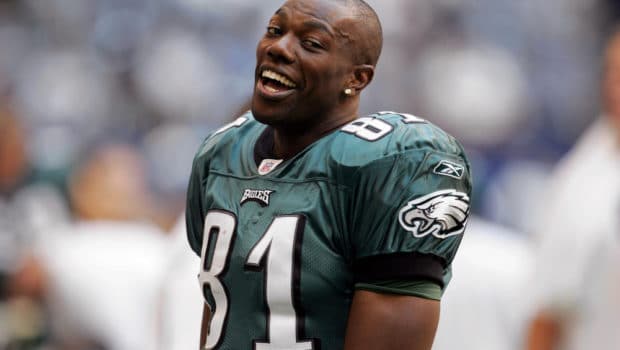 Eagles fans will long remember 2004, when Terrell Owens’ stellar play helped the Birds to the Super Bowl, where T. O. made nine catches even though he hadn’t played in more than a month because of a high ankle strain.

And they also remember the next year, when his delicate personality and salary demands created so much chaos that he was cut.

In other words, Owens is a mystery, inside a riddle, wrapped in an enigma, as Winston Churchill used to say.

And here’s the latest example:

The former wide receiver announced yesterday he will not be in attendance in Canton, Ohio, for his Hall of Fame induction ceremony in August.

“While I am incredibly appreciative of this opportunity, I have made the decision to publicly decline my invitation to attend the induction ceremony in Canton. I have already shared this information with the Hall. After visiting Canton earlier this year, I came to the realization that I wish to celebrate what will be one of the most memorable days of my life, elsewhere.”

Owens said he would reveal his plans at a later date. The 2018 Hall of Fame class will be enshrined on Aug. 4.

A five-time all-pro selection, he trails only Jerry Rice in career receiving yards (15,934) and ranks third in touchdown catches (153). He played for five teams — the 49ers, Eagles Cowboys, Bills and Bengals — in his 15-year career.

He previously announced he would have his wide receivers coach from his early days of the 49ers, George Stewart, be his presenter at the Hall of Fame. But he was not on hand for “NFL Honors” when the 2018 class was revealed, nor was he at Super Bowl 52 when the group was recognized.

Owens was heavily critical of the Hall of Fame for its voting process after being denied entry in his first two years of eligibility.

“We are disappointed but will respect Terrell’s decision not to participate in the Enshrinement,” Hall of Fame president & CEO David Baker said in a statement. “While unprecedented, the Pro Football Hall of Fame, the nearly 5,000 volunteers and the entire community are committed to celebrating the excellence of the Class of 2018 that will kick off the NFL’s 99th season.”

Baker added, “As we do not want to detract from this great honor being enjoyed by the seven other members of the Class of 2018 (Bobby Beathard, Robert Brazile, Brian Dawkins, Jerry Kramer, Ray Lewis, Randy Moss and Brian Urlacher), their family, friends, and fans; the Pro Football Hall of Fame will have no further comment on the decision made by Terrell Owens.”