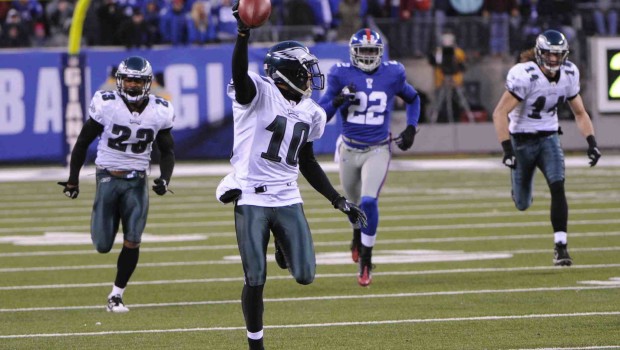 EX-EAGLE GREAT DESEAN JACKSON MAY BE COMING BACK TO TOWN!

Get ready for the return of DeSean Jackson!

The Eagles are likely to pursue a reunion with Washington Redskins wide receiver Jackson during the offseason, sources told ESPN’s Adam Schefter.

The Eagles would benefit from the addition of a speedy deep threat, and Jackson and Eagles coach Doug Pederson are big admirers of each other, sources said.

The Redskins are unlikely to be able to use the franchise tag on the 30-year-old receiver, as they also look to reach deals with quarterback Kirk Cousins and wide receiver Pierre Garcon.

Jackson spent his first six seasons in Philly, reaching three Pro Bowls and posting 356 receptions for 6,117 yards and 32 touchdowns, before signing with Washington prior to the 2014 season.

The Skins and Birds meet next Sunday. The Redskins won the season’s first matchup 27-20 with Jackson contributing four catches for 55 yards.