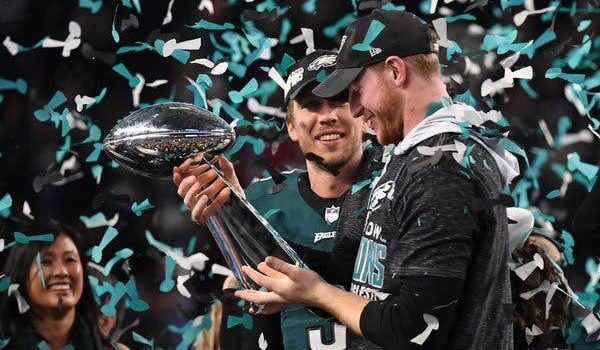 EX-EAGLE FOLES WAS WOOED BY COLTS BEFORE SIGNING WITH BEARS!

For an NFL quarterback who has had only sporadic success — his Super Bowl victory in 2018 notwithstanding — former Eagles quarterback has become one of the hottest commodities on the market.

According to The Athletic, the Bears were in a bidding war for Foles against a number of teams, including the Colts.

“The Jaguars weren’t shopping Foles this year, but the Colts were bidding as well as the Bears. And others were in the mix, from what little birdies say,” Dan Pompei wrote on Sunday.

The Bears won the battle and received the 31-year-old journeyman in exchange for a compensatory fourth-round pick. He still has three years remaining on a four-year, $88 million contract he signed with the Jaguars in 2019 and is expected to compete against Mitchell Trubisky for the starting role.

This will be Foles’ sixth fresh start. The Eagles’ 2012 third-rounder was traded to the Rams after three seasons, then signed with the Chiefs, then back to the Eagles, then with the Jaguars and finally, the Bears. Pompei says Foles’ success this time is a matter of managing expectations.

“The beauty of the Foles acquisition is the Bears bought low, trading a fourth-round pick to the Jaguars,” he wrote. “When other teams have bought low on Foles, they have been pleasantly surprised. The teams that bought high — the Rams and Jaguars — were disappointed.”

“I watched all of [Brady’s] tape from the last two years,” Reich said in a video conference call with the media last week. “For us, we got the guy we thought was the right fit for us, but this is a guy who I respect and admire immensely, obviously along with everybody else. … The way this thing went, we felt good about it.”