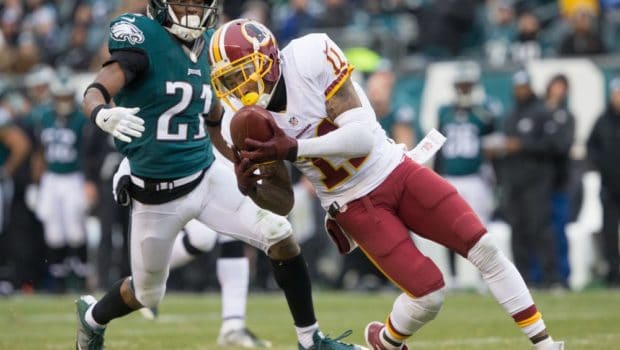 EX-EAGLE DESEAN JACKSON’S BLAST FROM THE PAST — AND FUTURE?

D-Jax dropped a hint last week that he might entertain returning to Philly as a free agent next spring.

Eagles fans at the Linc and everywhere yesterday got a quick reminder just how good former Birds wide receiver DeSean Jackson still is at the advanced age of 30:

Call it a blast from the past!

Jackson made a big impact in a Redskins victory in his return to Philly. Jackson, who spent the first six seasons of his career with the Eagles, recorded three catches for 102 yards, including an 80-yard touchdown. Jackson and the Redskins won, 27-22, and kept their playoff hopes alive as they improved to 7-5-1. At the same time, Washington eliminated Philly from playoff contention.

“I wish I could do it every game, if you ask me,” Jackson, whose touchdown catch was his longest of the season (above), and the longest by a Redskins player since an 81-yard touchdown catch from Cousins in 2014, told the Washington Post. “It’s not just when I come back to Philly. I just feel like whatever team I’m playing against, or the opponent, that’s what I feel like my nature is: a deep threat, vertical, down the field, putting a lot of speed on the corners or safeties. I’ve just been fortunate that I’ve been able to come back and make some big plays against my former team. But regardless of who it is, I enjoy doing it.”

It was his second biggest output while playing in Philly as an opponent, and his third biggest against the Eagles in all. After signing with Washington in 2014 after the Eagles released him that offseason, Jackson shined in his initial return, catching five passes for 117 yards and a touchdown. Later that year, while playing the Eagles at FedEx Field, he caught four passes for 126 yards.

Jackson’s 80-yard touchdown yesterday jump-started a sputtering Redskins offense. The team trailed 13-7 early in the third quarter when, on the second play of that possession, Cousins fired the pass downfield to Jackson, who had beaten Leodis McKelvin. Jackson had to adjust slightly, catching the ball over his right shoulder, then slipped a diving tackle attempt by McKelvin and jogged to the end zone, half-turned back towards his defenders in his trademark showboating style.

“The bomb was just a post route over the top of quarters defense,” Redskins coach Jay Gruden said. “Kirk did a great job in putting enough air under it where DeSean could adjust to it. DeSean would’ve been a world-class center fielder. He adjusts to the ball like no other. You just put it up in the air where he can see it and find it, and he’ll get it.”

Jackson chuckled upon hearing his coach’s comments. He did play baseball growing up, making several all-star teams. However, he said his love for football was stronger. Jackson joked that he does sometimes think about “coming back” to baseball and “steal some bases. Play for the Nats.”

Jackson’s 80-yard catch wasn’t his only big play, however. He made a 21-yard catch along the sideline, which required great concentration as he managed to get both toes down before falling out of bounds. The Eagles challenged the play, but the call of a reception was upheld. Three plays later, Washington scored again, on a 15-yard pass to Pierre Garcon, extending its lead to 21-13 with 12 seconds left in the third quarter.