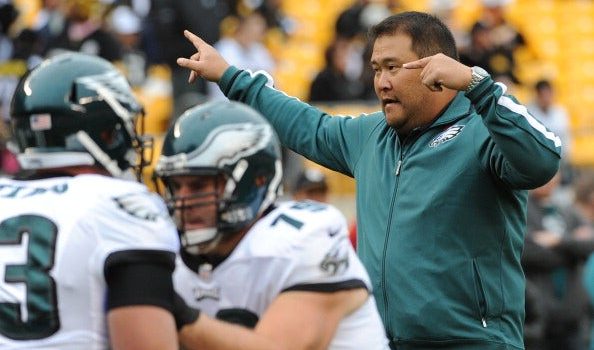 EX-EAGLE COACH WHO IS KOREAN TOLD HE’S NOT ‘RIGHT MINORITY’!

Former NFL Eagles offensive lineman and assistant coach Eugene Chung, who is Korean, says he was told he was “not the right minority” while interviewing for an NFL coaching job this offseason.

“It was said to me, ‘Well, you’re really not a minority,'” Chung said during a webinar, according to The Boston Globe, adding, “I was like, ‘Wait a minute. The last time I checked, when I looked in the mirror and brushed my teeth, I was a minority.'”

According to Chung, after he asked the interviewer to explain, he was told he was “not the right minority that we’re looking for.”

Chung, who ended his playing career with the Eagles in 2000 and was assistant offensive line coach in Philly from 2016-19, did not identify the team in question but said he was stunned to hear such a comment.

“I asked about it, and as soon as the backtracking started, I was like, ‘Oh no, no, no, no, no, you said it. Now that it’s out there, let’s talk about it,'” Chung said, according to the Globe. “It was absolutely mind-blowing to me that, in 2021, something like that is actually a narrative.”

But Chung wouldn’t point a finger at the NFL for the incident or his treatment.

“I’m not sitting here bashing the league at all, because there are great mentors and there are great coaches that embrace the difference,” Chung said. “It’s just when the Asians don’t fit the narrative, that’s where my stomach churns a little bit.”

After his playing career, he served as an assistant coach for the Eagles and Kansas City Chiefs, though he hasn’t held a position since being let go by the Eagles after the 2019 season.

“For me, in this profession, I don’t think I’m looked at as a minority,” Chung said, according to the newspaper. “Whether that’s good or bad, I don’t know.”

The Boston Globe hosted the webinar, which allowed Chung and others to discuss their experiences as Asian Americans in sports.