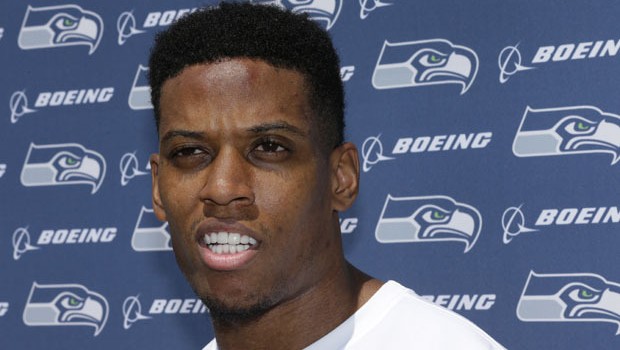 Just when Chip Kelly thought it was safe to back in the water:

Here comes another underachieving, whining ex-Eagle who has found fault with Kelly’s method of coaching.

Cornerback Cary Williams came to Seattle after a tumultuous two years in Philly in which he didn’t always see eye-to-eye with coach Kelly.

He was released by the Eagles earlier this offseason then signed a three-year deal with the Seahawks, and it’s been clear from his public comments since then that he prefers his new environment to the one he left in Philly.

The latest reminder of that came Tuesday when Williams joined 710 ESPN Seattle’s “Brock and Salk.”

During the 11-minute interview, Williams compared Seattle to his first two NFL stops, Tennessee and Baltimore, which he said had great players who were also great leaders. He talked about how Seattle’s coaches “give you everything they’ve got” while also fostering a fun culture.

“That’s what it’s supposed to be about it,” he said.

Williams was publicly critical of Kelly last season, at one point saying his strenuous practice regimen during the week was leaving players worn out by game time. He reiterated that criticism on Tuesday while recounting what the team’s mindset was heading into what would be a 24-14 home loss to the Seahawks in December.

“We was talking about the fact that our conditioning and things like was going to kick in because we worked harder than everybody in the National Football League with the Chip Kelly thing,” he said.

“We got out there, we got our teeth kicked in. So all that conditioning didn’t necessarily work. Preparation wasn’t necessarily the greatest neither that week. When you’re going up against teams that prepare well, practice well, coach well, it’s difficult in games like that. I think towards the end of the year we were exhausted and we got outcoached the majority of the games.”

Seattle dominated that game even more so than the 10-point margin of victory would suggest, gaining 201 more yards of offense, running 40 more plays and holding the Eagles – who were 9-3 heading into that game – to a season-low in points. Williams was asked how the Seahawks were able to do that.

“One, they were fresher,” he said. “Two, they were more physical. And I think in the National Football League, physicality is huge and you need that physicality in order to win games. Coaching is a part of it, too.”

Williams called Kelly “a great coach” but said he disagreed with his approach.

“I enjoyed my teammates, I enjoyed some of the coaches but ultimately we didn’t get the job done, and there was reasoning for that,” Williams said. “Whatever that is they’re creating, I didn’t believe it. We went to one playoff game, we had a home playoff game and we lost that. And it was his first year, I understand that. I think he’s a great coach, a tremendous coach. I just think that what’s going on there isn’t necessarily the right way of doing things, of winning games. He’s won games, but when you’re going against elite talent, elite players, elite teams, elite schemes, we weren’t able to get the job done.”