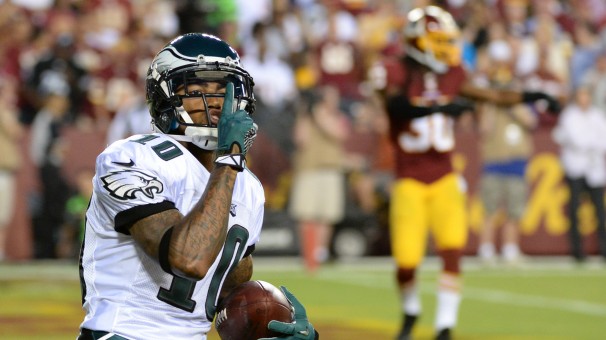 'EVERYBODY IN THE [EAGLES] LOCKER ROOM LOVED ME'

The Washington Post’s Don Steinberg found some intriguing comments from DeSean Jackson in a recent appearance with DJ Skee:

“The funniest thing, man: all this stuff like he’s not a locker room player, he don’t get along with his teammates, the people that really know me, they’re like ‘Man where is all this coming from?’ ” Jackson said. “I had teammates texting me and hitting me up, teammates that’s still on the Eagles right now, like ‘What were they talking about you ain’t a team guy, you don’t get along with people in your locker room?’

“All the NFL reporters, I could say a lot of names but I’m not even gonna get into that,” Jackson said. “But as far as the Marcellus Wileys, the Willie McGinests, Antonio Pierce, you know I respect all them dudes, because they understand where I came from. They was raised on the same level, you feel me? The Arsenio Halls, Stephen A. Smith. You know I had a chance to go on with Stephen A. Smith, to go on with Arsenio Hall. All these dudes kind of was raised and was born kind of the same way we was raised and grew up through the slums. So it’s like forget all the allegations, man; the real ones that know me know I’m a good guy. I go out there and I put it on the line for my teammates, you feel me?”

Jackson also talked about his ability to come up big in pressure situations. I think. It’s a good quote, regardless.

And he talked about his new team, the Redskins.

“I love Washington,” Jackson said. “Let’s get that straight first. I haven’t always loved ‘em. You know, they’ve been my enemy. Really, I probably done scored the most touchdowns out of any other NFC [East] team, I probably scored the most touchdowns on the Washington Redskins. That’s why it’s crazy. Mr. Snyder, Bruce Allen the GM, they were all like ‘Man, we’re tired of you scoring touchdowns on us.’ They didn’t want to let me out of that building, you feel me? We was going back and forth trying to get this deal done. I left, came back in, so they was like ‘Man, we’re not feeling having keep having you scoring touchdowns and scoring on us. We want you to be the one scoring for us to be beating all these other teams.’ So I’m just very blessed about the opportunity, for real.”

And he talked about what he learned from Michael Vick, whom he described as a big brother figure.

“Him just telling me that whole situation, how he used to carry 50 homies with him, everybody going here and there, he taught me a lot,” Jackson said. “Because at the end of the day, when a certain situation comes around, ain’t nobody gonna take your back. They all gonna rat you out. And that’s the situation he learned from, which actually helped me to say ‘Man, some of these homies that ain’t here to help me and to be a positive, you’ve got to keep them to the side, man.’ So I want to shout out my big bro Mike Vick.”