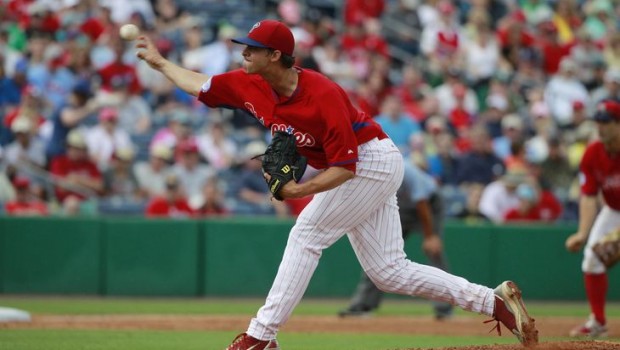 “The Phillies should be very excited about him,” said Rodriguez who struck out on a Bola change-up. Good arm, power slider, power change-up. I think he has a bright future.”

If you are looking for bright and shiny objects in the Phillies’ spring training camp, look no further than:

He is scheduled to open the season at Double-A Reading.

But Phillies fans caught a glimpse of what could be on Friday afternoon at Bright House Field.

The Phillies’ No. 2 prospect pitched three scoreless innings in the Phils’ 10-0 loss to the Yankees.

“There were some nerves and some butterflies, but it was a cool experience for me,” he said afterward.

The Phillies selected Nola with the seventh overall pick in the 2014 draft, and don’t be surprised if he makes the big club before the end of the season.

Nola allowed five hits and struck out four. He worked out of a jam in the second inning. The Yankees had runners on second and third with one out when Chris Young flied out to right field. Phillies right fielder Jeff Francoeur threw out Rodriguez at the plate to end the threat.

Nola allowed a leadoff double to Brendan Ryan in the third. But with Ryan on second and one out, Nola struck out Chase Headley looking on a 94-mph fastball and struck out Carlos Beltran swinging on an 82-mph changeup.

Nola also struck out Rodriguez on an 84-mph changeup in the fourth. Young fanned to end the inning.

Rodriguez knew about Nola before he stepped into the batter’s box in the second, when he singled to center field.

“LSU, first-round pick,” Rodriguez said. “The Phillies should be very excited about him. Good arm, power slider, power changeup. I think he has a bright future.”

And what about that changeup that got A-Rod in the fourth?

“The one I almost choked on?” Rodriguez said. “Yeah, that was a pretty good changeup.”

Nola is pretty reserved, at least in front of reporters. But he seemed to enjoy himself. He said he heard a few LSU chants in the bullpen while warming up. He had been scheduled to start, but Jonathan Papelbon pitched the first inning instead because of the threat of rain.

Nola struggled with his location early, leaving a few pitches up in the strike zone, but he adjusted.

“I missed a couple of two-strike pitches early for a couple of doubles, and I knew I had to get the ball down more, and I did,” Nola said. “Up here, you have to make quality pitches, and I didn’t do that the first part of the game.”

But Nola looked good for his first time in big league camp. Scouts said last summer that he could be in the big leagues before any other pitcher in the Draft. That has not changed.

“I try not to get too far ahead,” Nola said. “Whenever [the Phillies] think the time is right, that’s their call.”