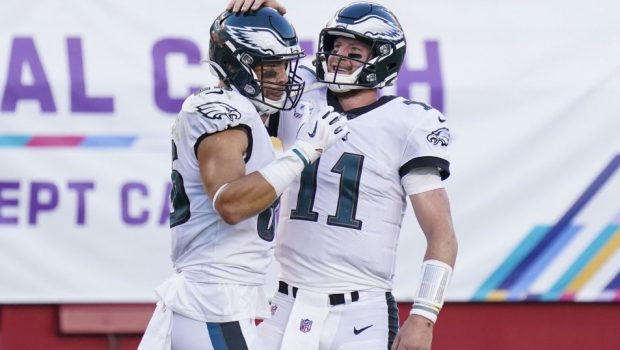 But he completed just 18-of-28 passes for 193 yards, one touchdown and one interception.

Injuries along the offensive line and at the wide receiver position have cost the Eagles through all four of their games, but Wentz is still the root cause of their issues offensively.

He struggled to push the ball downfield with accuracy outside of his touchdown strike to Travis Fulgham and took three sacks on the night.

It may have taken three weeks, but we finally got to see Jalen Hurts under center for the Eagles, for three snaps as a gadget player. He was given two designed rushing attempts in his first taste of NFL action, tallying up 14 rushing yards and, unfortunately, one fumble. Hurts did drop back to pass on his other snap at QB, though that too turned into a rushing attempt when he broke the pocket on a scramble for a 4-yard gain.

Rookie receiver John Hightower had to step up once again for this depleted receiving corps and played 32 snaps on the night. He performed well enough on his limited opportunity, too, catching both of his targets for 22 yards and two first downs.