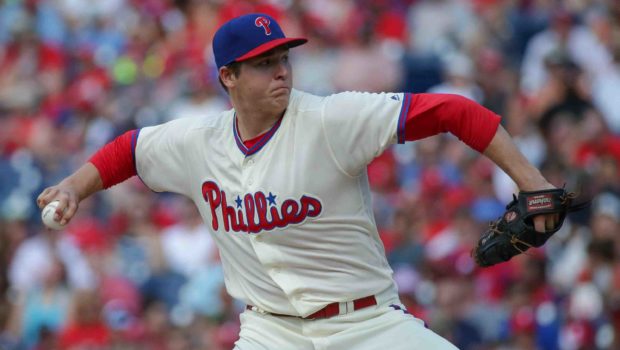 He got ahead no balls, two strikes on Peter O’Brien with no outs in the second. Then he sent a message.

On the third pitch, Eickhoff fired a 91-mph fastball up and in. O’Brien dipped and dove out of the way, but Eickhoff made it clear: He was going to own the inside part of the plate in the Phillies’ 4-1 loss to the D-backs.

“That’s what I’ve always done,” Eickhoff said. “Going inside is important, and I feel like I do that. I was able to do that for the most part today.”

Manager Pete Mackanin had been disappointed with the lack of aggressiveness his pitchers have shown, speculating that it contributed to the 20 home runs the staff has allowed over the last five games. Adam Morgan agreed after not making it out of the fifth inning in his start on Friday.

Eickhoff was not deterred from the inner third, though. He continued to attack O’Brien inside, setting him up for a sweeping slider over the plate that the D-backs’ rookie whiffed at. Eickhoff struck out O’Brien twice more before leaving the game after 5 2/3, having allowed three runs on nine hits.

Through four innings, the 25-year-old right-hander had yet to surrender a run and had recorded five of his six strikeouts. He was pitching with moxie and challenging D-backs hitters, who had mustered no more than singles off him.

The fifth inning wasn’t the same story. Nick Ahmed kicked off the scoring with a home run to left-center. Jean Segura followed with a single, and Paul Goldschmidt brought him home with Arizona’s second blast of the inning. It was the sixth time in five games a Phillies pitcher allowed multiple home runs in an inning. But neither Mackanin nor Eickhoff felt the starter backed off.

“I went after them like I had the whole game,” Eickhoff said. “Balls just found the holes, and that’s kind of what I’m looking at it as.”

Where Mackanin felt Eickhoff faltered was with his command in the sixth inning, which he did not make it out of. After loading the bases, Mackanin pulled Eickhoff with two outs, calling on Andrew Bailey to erase the threat.

“He could’ve gotten out of it, but I chose not to leave him in there,” Mackanin said. “Bailey did a nice job bailing him out, going right after the hitter. I hate bringing a guy in with the bases loaded, but I felt like I had to.”

Eickhoff has been the lone bright spot on a starting staff that had an 8.45 ERA over their last eight games before Saturday. That number included Eickhoff’s six shutout innings in Toronto. Over his last four starts, Eickhoff has gone 25 1/3 innings, allowing six runs (2.13 ERA).