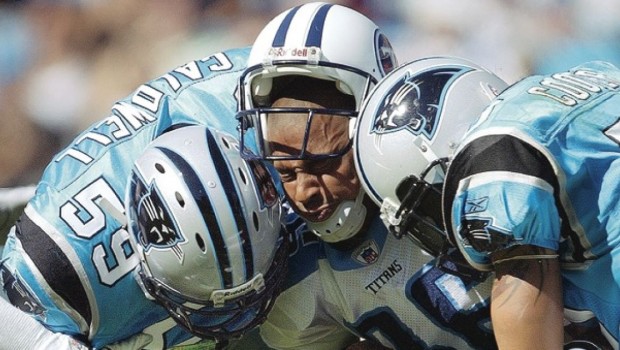 ON EVE OF ITS BIGGEST EVENT, NFL IS BRAIN DEAD ON HEAD TRAUMA

A commissioner who acts like he wants his profile on a stamp and a rule book that must be read by cryptographers to be understood are just a couple of the NFL’s problems on display this season.

But neither of them comes close to the problem the NFL is going to have when the public fully awakens to its Big Tobacco-style corporate callousness, an indifference so cold and snowblind that this week a league exec urged parents to potentially compromise the brains of their 10-year-olds.

Unless there is a radical shift in management and tone, 20 years from now NFL owners are going to find themselves presiding over a league that is not only less popular but that actively repulses people.

This week, researchers at Boston University published a study in the journal Neurology showing that former NFL players who played tackle football as young children suffered an average of 392 concussions over their lives and performed “significantly worse” on tests of verbal IQ, reasoning and planning, and recall. The study concluded something that is merely common sense: Repetitive head blows are not great for kids.

Yet here was the NFL’s response, in a Super Bowl news conference Thursday devoted to “Health and Safety.” League vice president Jeff Miller declared, “I would tell a parent there is no safer time for a child to play football than today. For the value, excitement and fun, I’d encourage your children to play youth football.”

We have grown to love the NFL up to this point because — amid natural complications and foibles — it can show humanity at its strongest, highest and fastest and with its highest pain threshold. But when the game and the people who run it start showing humanity at its very worst — reckless disregard for others, prioritizing profit over people — then the audience begins to ask, “Is watching this game making us feel better or worse?” And the answer is getting murkier all the time. The NFL is beginning to make its audience feel guilty and uneasy.

Relive some of the great plays and key player performances from past Super Bowl games.Superficially, the league seems invincible: An NFL game was the top-rated TV show every single week, and a peak of 60 million viewers tuned in for the Seattle Seahawks’ comeback in the NFC championship game. This was despite one of the most troubled seasons in NFL history, with domestic violence and child abuse scandals.

The handling of those matters revealed the extent to which the league is more interested in curing perceptions than in curing its real problems. This was the Ray Rice fiasco in a nutshell: Commissioner Roger Goodell first decided that knocking out your fiancee was a two-game suspension; he then decided that knocking out your fiancee when the whole world could see it was an indefinite suspension. That was about as clear as it gets: Harming your partner is one thing; harming league image is much more egregious.

Apart from being totally disingenuous, such defense of image betrays something about the league’s relative lack of confidence in its product. There are indicators to suggest that if the NFL doesn’t change course, pro football could become boxing. In a recent Bloomberg Politics poll, 50 percent of Americans said they wouldn’t want their son to play the sport. And just 17 percent believed the league would grow in popularity in the next 20 years. A Harris poll of Americans’ favorite sport found that pro football had suffered a three percentage point drop from 2013.

In one sense, the NFL is a victim of its success: It has become such a huge entity that its problems are no longer its own but have become public health issues. Some of what we are watching is the league being dragged kicking and screaming into the 21st century after decades of operating however it wanted behind closed locker room doors — with impunity — on everything from painkiller abuse to domestic violence.

“They are now so big and important and so large in the public mind that their origin as a sport of ritualized violence starts to conflict with their standing in the culture,” says Stephen Denning, author of the influential book “The Leader’s Guide to Radical Management” and a consultant who studies how to guide large organizations through crisis and change. “So now their challenge is to articulate what is the role of the NFL in America and to square the fact it’s a sport of ritualized violence with the fact that you have families watching and players whose health is compromised by it. It’s a tricky challenge, but they certainly have to deal with it.”

NFL management has a choice to make: It can double down on stupid and continue on this queasy-making path into a future of constant moral crisis, litigation over injuries and eventual government interference. It can dispute and parse the science of concussions while pretending that “heads up” tackling can make football safer for small boys with thin necks — and thus continue to lose spectator trust and affection.

Or it can accept its responsibility for its part in a public health crisis and say, “It’s in the best interest of children to play flag football instead of tackle given the red flags we are seeing.”

The league needs to decide what it wants to look like in 20 years: a good corporate citizen or a cross between Big Tobacco and Big Coal.

“There is an element of changing sensibility, a recognition that violence has human consequences, and that realization wasn’t present five or 10 years ago,” Denning says. “How does a sport that is ritualized violence on Sunday succeed in a culture that during weekdays, people say that’s not the culture we want. . . . There is this cultural contradiction, and that’s something that, if they don’t deal with it, will have serious consequences.”