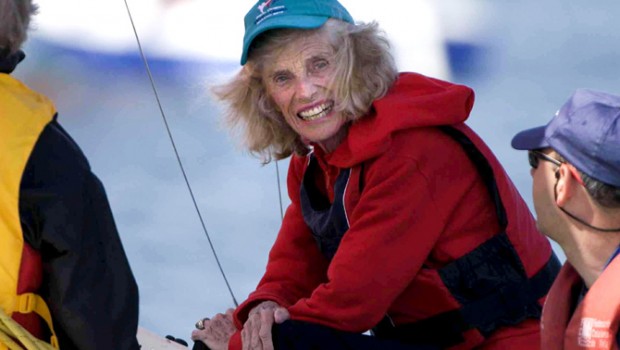 HOW EUNICE SHRIVER AND SPECIAL OLYMPICS CHANGED THE WORLD Last night’s opening ceremonies of the 2015 Special Olympics World Games in the Los Angeles Coliseum on ESPN was a three-hour testament to the power of Shriver’s idea that persons with intellectual disabilities can compete in all sports — and corporate America agrees!

But she had a greater effect on this region’s athletes than team owners Josh Harris, Ed Snider, Jeff Lurie and Dave Montgomery combined.

And you can throw in Bert Bell and Eddie Gottlieb, Philly guys who were founding fathers of the NFL and the NBA.

Before she started Special Olympics, the conventional wisdom was that no person with intellectual disabilities was capable of playing sports, floating in a pool or, puh-lease, participating in a team sport.

Forty-seven years after she founded Special Olympics with a competition at Chicago’s Soldier Field, more than 4.5 million athletes worldwide are participating in more than 170 countries.

Last night’s opening ceremonies of the 2015 Special Olympics World Games in the Los Angeles Coliseum was a three-hour testament to the power of Shriver’s idea and to the sports establishment’s agreement:

Three hours live on ESPN, with daily and nightly coverage on the Worldwide Leader until the games close on August 2!

Sponsorship by Coca-Cola, Bank of America and Toyota, among other well-known brands! In Pennsylvania, New Jersey and Delaware, more than 85,000 people from age 8 to 80 have competed in 25 sports. Before 1968, no one in mainstream sports or education believed that people with intellectual disabilities could play sports.

Shriver’s death six years ago at the age of 88 was met with the kind of media coverage reserved for heads of state for one obvious reason:

She and Special Olympics have truly changed the world.

Through Special Olympics, persons with intellectual disabilities have entered the wide world of sports, and through the self-esteem gained in their athletic pursuits, many have achieved employment, friendship, marriage and many of the other aspects of life that “normal” people take for granted.

Just as importantly, their families and friends’ lives have also been enriched.

One of the definitions of “genius” is “a person endowed with transcendent mental superiority,” and in that narrow framework Shriver surely qualifies. She was scarily smart with terrific judgment. And she had a vision for what special athletes could do and how sports could change their lives. She didn’t sit on the sideline and issue orders.

“Momentum on wheels” is how her daughter Maria described her energy and work ethic.

No amount of whining from the naysayers would get in her way: “Oh, what will happen if they lose … they’ll cry!” To which Eunice responded, “So what, that’s what everyone does,” her oldest child Bobby told Sports Illustrated.

In 2007 Bobby was asked what one quality his mother had that would best characterize her success is creating and growing Special Olympics.

“When I am in a situation today and I think, ‘What would mother do?’ and the answer is ‘Run ‘em over.’ ”

I was on the receiving end of that rage 38 years ago when an interview I had conducted with her mother, Rose Kennedy, did not turn out the way Eunice had hoped. She called me a few nights later in the Washington Star sports department and lectured me about loyalty and friendship. Ten years later, when she and her husband Sarge (left) hired me to help develop national publicity for the 1987 International Special Olympics at Notre Dame, she emphasized that she wanted the athletes to be taken seriously on the nation’s sports pages.

Even though I had been an editor at Sports Illustrated, my efforts were going nowhere – “If we covered this event we would have to cover the wheelchair games and every other event for the handicapped,” the clueless managing editor told me with a straight face.

So I dejectedly left the building and on Sixth Avenue ran into Heinz Klutmeier, the magazine’s chief photographer, who said, “Some of the best pictures I have ever taken were of Special Olympics athletes in Wisconsin [where he lived].”

Klutmeier prevailed, and the Notre Dame games received six pages of coverage in SI (including Bill Eppridge’s wonderful photography) – the ultimate validation of an athletic event – as well as in Time, Newsweek and coverage on the sport pages of many of the nation’s newspapers.

A week later, Eunice was in Hyannisport and tracked me down at my dad’s house in Philly. She was stunned by the coverage, and she went on for at least five minutes about how impressed she was by my efforts and how important it was for Special Olympics athletes to be taken seriously for their athleticism.

The media have had a tendency to treat Special Olympics competition as human interest, not as a sports story.

And that is a mistake.

At Notre Dame, the fine SI writer Ed Swift posed the question to Sarge Shriver, “Why should we take these athletes seriously?” Actor William Hurt heard the question and responded, “You have obviously never witnessed a Special Olympics competition.”

Hurt led Swift around for an hour, and he was so impressed that the result was “They Came Up Roses,” a 2,000-word piece that started like this:

“You couldn’t avoid the spirit of the event. Everywhere you turned it hit you like a fist. In South Bend restaurants parents of Special Olympians raised glasses in thankful toasts to their children and to God for giving them their children. Crusty coaches and ex-athletes assembled in watering holes to recall that this was how sports used to be: played for fun, for enrichment, for the intrinsic value of competition.

“The spirit did not spring from the Olympic trappings — the flags and pageantry and medals — or the dignitaries, or the ABC cameras, or the celebrities, or the 16,000 volunteers on the campuses of the University of Notre Dame and St. Mary’s College, or the 325,000 people who attended the nine-day meet. It came from the athletes themselves. The 4,717 Special Olympians from 70 countries, miracle workers that they were, somehow stole their own show.”

As Sandy Koufax discovered first-hand when he was a hugger at a Special Olynpics event at UCLA in 1979. “These guys really want to win!” the Hall of Fame pitcher, who knew a thing or two about winning, shouted at me.

When Eunice spoke to 60,000 people and an ABC television audience in Notre Dame Stadium on the night of the opening ceremonies at that 1987 international games, she was really addressing the athletes:

“The right to play on any playing field?

The right to study in any school

The right to hold a job?

The right to be anyone’s neighbor

You have earned it”

But Eunice Shriver had an idea that has touched and changed more minds and more lives than Gates and Bogle and their companies put together.

“What’s so special about Special Olympics?” Sarge Shriver used to ask me rhetorically. If you want to find out what Sarge was talking about, watch the rest of this week’s ESPN coverage of the World Games. Or, better yet, go to any Pennsylvania, New Jersey or Delaware Special Olympics competition.

You will see first-rate athletes and accomplishments in an atmosphere that will make you feel better about yourself.

And that was the real genius of Eunice Shriver.