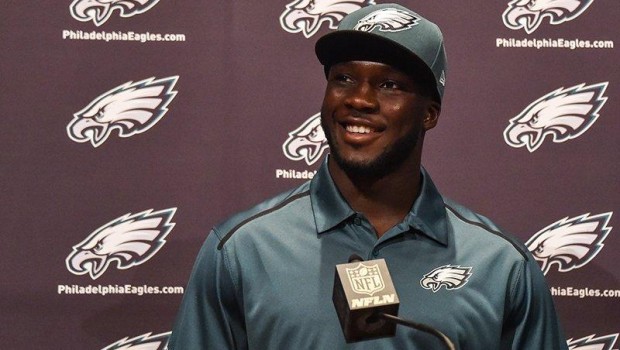 ESPN’S KIPER GIVES EAGLES DRAFT B-PLUS: ‘CAN BE BACK IN PLAYOFFS’

The dust has settled on the NFL draft, and while the Eagles didn’t pull off the Miracle of the NovaCare Complex and get a chance to draft Marcus Mariota, they did help themselves in several areas:

Wide receiver (Nelson Agholor in above photo), inside linebacker and cornerback.

One of the joys of this Sunday is that we do not have to endure Mel Kiper’s irritating and often mindless screaming on ESPN.

However, his grades are out, and he gives the Eagles a B-plus:

Chip Kelly might not have the maestro he coveted to run his offense, but he didn’t leave this draft empty-handed. He has put a premium on guys that will buy in, and I think he got those types and hit a couple home runs in the process.

Nelson Agholor to me just screams “high floor.” He’s a great route runner, plucks the ball out away from his body, has the proven toughness of a return man — you should hear Bill Polian talk about that — and is sneaky explosive. He can get behind defenses.

I also think Eric Rowe at No. 47 overall was a steal. He is a great kid and offers up versatility (CB or S), and I thought he’d be a good value as early as the end of Round 1.

Jordan Hicks was a bit of a reach, but I can see where depth need is, given the group they have at linebacker. JaCorey Shepherd was often overlooked at Kansas, but was a steady performer and certainly helps at cornerback, and though Derron Smith had a reputation that surpassed what he showed on tape, that’s a good need fit in Round 6. Eagles fans feeling let down by this draft should cheer up — they got some good pieces. If Sam Bradford is indeed the answer, they can be back in the playoffs.