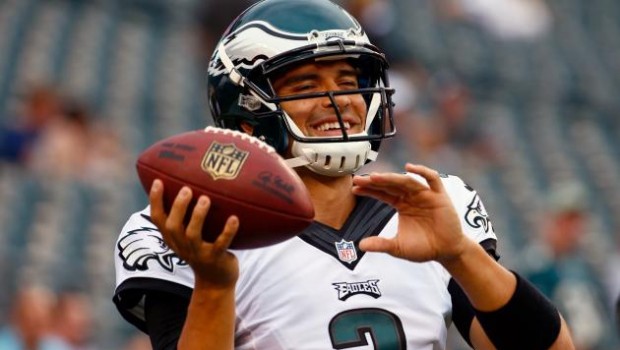 As the Eagles prepare for their Monday Night Football date with Carolina, all eyes will be on the Birds’ QB Mark Sanchez, who will be showing the nation’s ESPN audience how he has resurrected his career after failing miserably with the Jets.

And no one will be watching closer than ESPN analyst Jon Gruden, who knows a thing or two about offense, having been the Eagles’ coordinator from 1995-to-97 before head coaching the Tampa Bay Buccaneers to the Super Bowl title in 2003.

Here are excerpts from Gruden’s view thanks to ESPN.com:

I’ve seen quarterbacks reinvent themselves over the years…. Mark Sanchez has that opportunity. The Eagles’ coaching staff believes in him, and the brain trust has an offensive background with coach Chip Kelly and offensive coordinator Pat Shurmur. Sanchez understands these West Coast passing principles; nothing here is new to him. The tempo is exciting to him. He is familiar with it and likes it.

The supporting cast around Sanchez is outstanding. The Eagles might have the best tandem of backs on the planet in LeSean McCoy and Darren Sproles. They might have the best left tackle in Jason Peters. Their center, Jason Kelce, is the best in the league whom I have seen this season. They have arguably one of the game’s best receivers now that Jeremy Maclin is healthy. I do not think Sanchez has had offensive support like this in his career.

You still don’t know what to expect. Sanchez could throw for 400 yards in this game. He could also throw some interceptions. We saw him throw a couple last week. This is just a great situation for him as long as the Eagles can keep him healthy, so the opportunity for him to have a Carson Palmer-like reinvention of his career certainly exists.