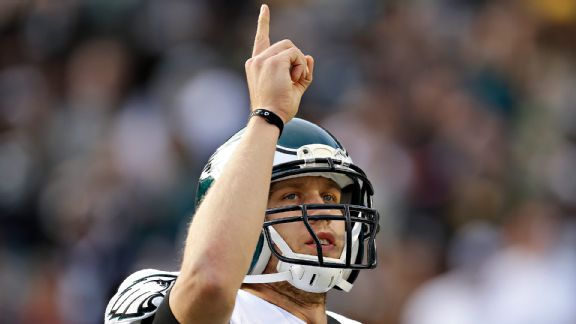 I’ll stick with Schefter, who has some of the best sources in pro football.

He reported yesterday that new Eagles head coach Doug Pederson wants to bring back the player he had a hand in drafting in the third round in 2012 as a member of Andy Reid’s staff.

The Eagles had just traded Foles away to the Rams in exchange for Sam Bradford last offseason. It was one of the most notable moves around the entire league but ultimately didn’t pan out for either side.

Schefter also reported Sunday the Eagles have interest in re-signing Bradford but aren’t expected to use the franchise tag on him.

Bowen of the Daily News acknowledged Pederson liked Foles but reported the Eagles aren’t actually considering bringing him back. Bowen also referenced the hangup of a potential trade.

Foles wound up being benched for Case Keenum due to poor performance, while Bradford showed signs of rust after missing all of the previous season with a torn ACL. The situation was a big reason Philly fired ex-coach Chip Kelly, who was given final say over personnel and decided to trade Foles in the first place.

Despite a woeful 69.0 passer rating to go with seven touchdowns and 10 interceptions in 2015, there’s reason to believe Foles can get back on track. As recently as 2013, the 27-year-old tossed 27 touchdowns to only two picks playing in Kelly’s system.

Per Spotrac, the rather club-friendly deal Foles is under in Los Angeles features a mere $1.75 million in salary, which becomes fully guaranteed on March 13. The kicker is the $6 million roster bonus Foles is due if the Rams keep him through March 16.

With plenty of size, a nice touch on deep passes and at least some indication from his past he can be a franchise QB, Foles may simply need to retreat to the Eagles to find his groove.

It certainly stands to benefit Foles if he unites with Pederson, since the coach had a vision years ago for how he’d fit in the NFL. Bradford is a free agent and didn’t do enough to save Kelly’s job, so letting him walk in favor of a player Pederson is familiar with seems like a logical course of action.

If the Rams do pull off a trade, speculation will persist that they’ll draft a signal-caller in the first round of this year’s draft. Although L.A. has the 15th overall selection, it has two second-round picks as ammunition to move up and take one of the top prospects.