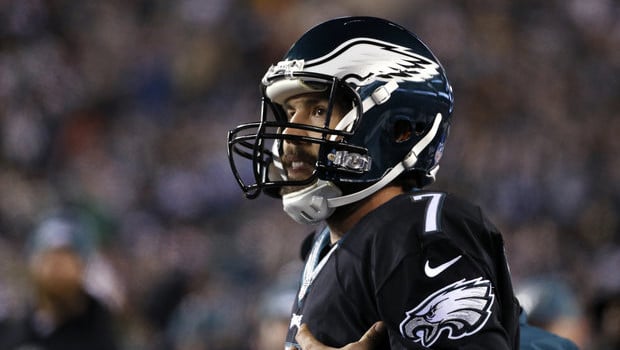 ESPN GURU: EAGLES SHOULD SIGN BRADFORD, BUT AT BARGAIN PRICE

While the rest of the country is focused on this Sunday’s Super Bowl 50 in the Bay area, Eagles Nation is waiting with baited breath about the fate of quarterback Sam Bradford.

“I think they should [sign him], but they have to watch the price. Maybe if they want to do a provisional contract, like Nick Foles (got from the St. Louis Rams) at two years, $24 million and change, that would be a fair thing,” Clayton said. “If the cost goes up to $16 million, that is manageable, but it would have to be a (Miami Dolphins quarterback) Ryan Tannehill type deal, where they could get out of it after a year or two.

“When you look at the landscape, I don’t know how many quarterbacks are going to be available,” Clayton said. “It looks like Chip Kelly is going to keep Colin Kaepernick, you would have to anticipate there might be a quarterback change in St. Louis, but I don’t know how active the quarterback market is going to be for Sam. Houston could get involved but at a low number. If you get him back at $12.5 or maybe up to $15 or $16, but one a one-or-two year deal.

“Debatable. He still has to prove it,” Clayton said when asked if Bradford was a franchise quarterback. “That doesn’t mean he won’t be, but you get to this stage of his career and you can see — Cam Newton in his fifth year has really come through, [Seattle Seahawks quarterback] Russell Wilson has come through, and he really hasn’t.”