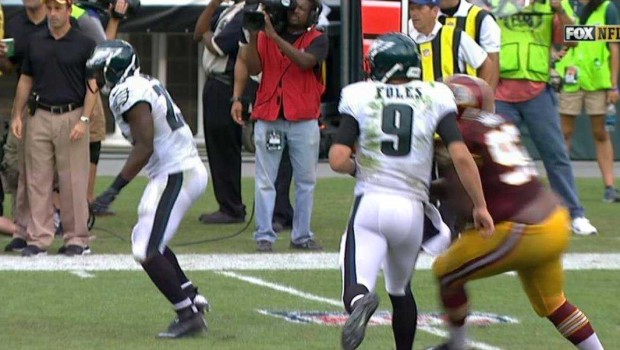 ESPN BLOWHARD STEPHEN A.: ‘I’M APPLAUDING BAKER FOR THE HIT’

It is gratifying to know that Stephen A. Smith, whose initial reaction to the Ray Rice domestic battering tape was to blame the woman, now thinks that Chris Baker’s hellacious cheap shot on Nick Foles on Sunday was fine with him.

He is dead wrong on both counts.

Speaking on First Take on Monday, Smith not only said he didn’t think the hit was dirty, but he applauded Baker for knocking Foles down.

“I’m applauding Baker for the hit. Didn’t bother me at all. I actually loved it,” Smith said. “Now I didn’t want Nick Foles to get hurt, and to be knocked out of the game, which I was worried about when he was laying on the turf. … Nick Foles was not on the other side of the field. Nick Foles was running towards the action, jogging toward the action. Knowing you are a quarterback, as protected as they are these days, if anything these guys want to hit the quarterback more than they did in the past.”

The only problem with Smith’s argument? It was an illegal hit. By rule, a quarterback is protected against those hits, even after an interception has been thrown.

Smith’s take was shared by some members of the Eagles’ defense. A few players, although they were clear in saying they didn’t like the hit, did mention that getting hit is part of the game.

“Quarterbacks get hit,” cornerback Cary Williams said. “He got up. That’s good. I’m glad he did (get up).”

Clean or not, there is no denying that Foles earned points with his teammates by taking the hit and staying in the game. After Baker blindsided Foles, the quarterback led the team to 10 unanswered points that helped seal the win over the Redskins.

Still, not everyone is ready to hand Foles a badge of honor for staying in the game — especially Smith.

“You are going to jog and lollygag toward the action on a football field?” Smith said. “Shame on Nick Foles. I bet you he won’t make that mistake again. He should have known better. He deserved to get popped.”