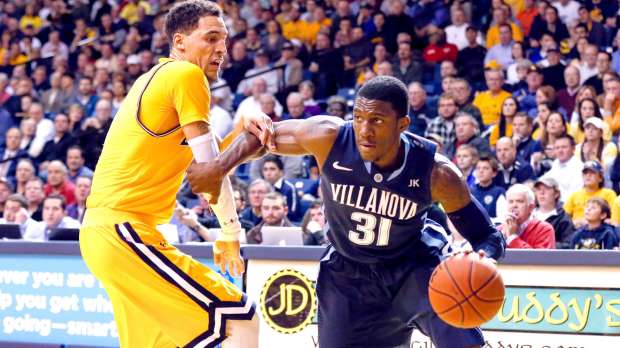 In this town, there is nothing like the anticipation of a Big 5 basketball game, even if it isn’t in the Palestra.

And Wednesday night provided a good example of why.

The nationally ranked Villanova Wildcats were playing a La Salle team that defeated them two years ago in their last visit to Tom Gola Arena.But Villanova’s talent and depth came to the fore, as Villanova shot 58 percent from the field in the first half en route to an 18-point lead and defeated the Explorers 84-70.

Villanova (7-0) was led by Darrun Hilliard and Dylan Ennis (photo above) with 15 points each. Ennis also added nine assists. Jerrell Wright, who played only three first-half minutes because of foul trouble, led the Explorers (4-3) with 19 and Khalid Lewis added 17. Jordan Price, La Salle’s leading scorer with a 17.7-point average, made just 2 of 8 shots from the floor and scored 10 points.

Villanova held a 47-29 halftime lead and never allowed the Explorers to get any closer than 11 for much of the second half. The Wildcats extended their lead to 21, 77-56, on two free throws by Josh Hart with 5 minutes, 7 seconds to play, but the Explorers weren’t ready to go home just yet.

Wright and Lewis combined to score 12 of La Salle’s next 14 points and the Explorers trimmed the deficit to 10, 80-70, with 2:10 remaining. But Ennis set up the Wildcats for a dunk by Daniel Ochefu and a layup by JayVaughn Pinkston to get the Wildcats out of danger.

The Wildcats connected on four of six three-point tries and turned the ball over only twice to take a 47-29 lead at the break. They also scored 17 points off of eight La Salle turnovers. Hilliard led Villanova with 12 points and Pinkston and Ennis added eight apiece.