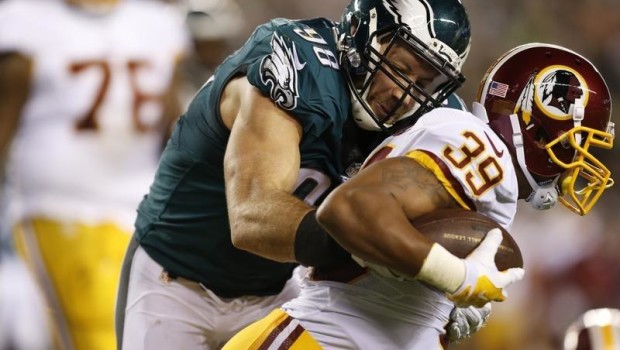 IS THE END COMING FOR EAGLES’ DE CONNOR BARWIN?

Connor Barwin may take a seat.

“Like a lot of our other guys I think he didn’t play his best game this last game,” D-boss Jim Schwartz said of Barwin’s performance. “He’s a guy that can probably benefit from lesser reps and maybe more production. We’ve talked about that. It’s just tough in game situations when you’re not doing well and guys start to press trying to do too much. That includes playing too many reps.”

Barwin had four tackles while only playing in 81 percent of the Eagles’ defensive snaps, which was still tops among the team’s defensive linemen.

Pro Football Focus rated Barwin as one of the worst defensive ends across the NFL in Week 7:

Working primarily against Washington left tackle Trent Williams was always going to be a tough ask for Barwin this week, but he was practically erased from the game by the big tackle. He notched just two total hurries and two stops in the game, but was routinely dominated at the point of attack and he rushed the passer 31 times to get that output. Barwin was simply outmatched in this game, going up against one of the league’s best.

After failing to record a sack of Redskins quarterback Kirk Cousins, it isn’t surprising to see Schwartz attempting to shuffle the deck up front given that his scheme calls for very limited blitzing.

Should Barwin wind up seeing even less playing time than he did against the Redskins, it could clear the way for Vinny Curry to take on an expanded role after playing only 31 snaps in Week 6.

Through the first six games of the season, Barwin has only registered one quarterback sack despite playing 79 percent of the team’s defensive snaps thus far.

“Connor’s a good player,” Schwartz said. “When he’s fresh and going. He’s no different then the rest of our guys in that way. We’re not disappointed in him.”