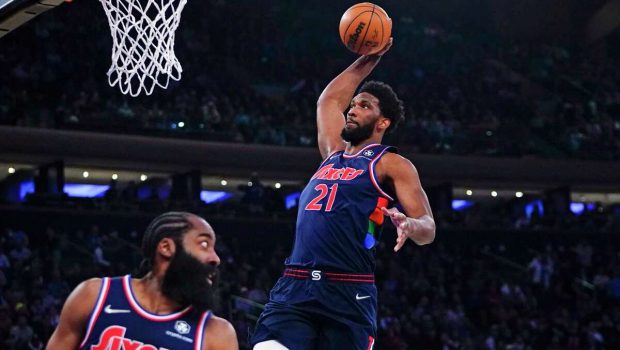 Joel Embiid is the greatest Sixer since Allen Iverson, and that’s giving Iverson a lot of credit.

Jojo may even be in the Top 5 Sixers of alltime, along with Wilt and Charles Barkley and Julius Erving and Billy Cunningham.

He has led the NBA in scoring, finished No. 2 for MVP twice, and he has the heart of a lion.

The fans love him.

But not the Inky’s silly Mike Sielski, who probably could find fault in the Hope Diamond:

Embiid is a remarkable player for many reasons, and he is the Sixers’ indispensable player.

They will go nowhere without him.

But it remains fair to ask how far they can go with him unless and until he tightens up the looseness in his game.

It’s easy to say Daryl Morey should have provided a better supporting cast around Embiid or Doc Rivers should coach up that cast, and there’s plenty of truth in saying that.

Harden isn’t the reliably great isolation scorer he once was, and he should adjust accordingly.

But even with those shortcomings, they ought to be better than .500 merely for Embiid’s presence.

This sense lingers that there is more that he has to give, that he can give, and that he hasn’t yet given.