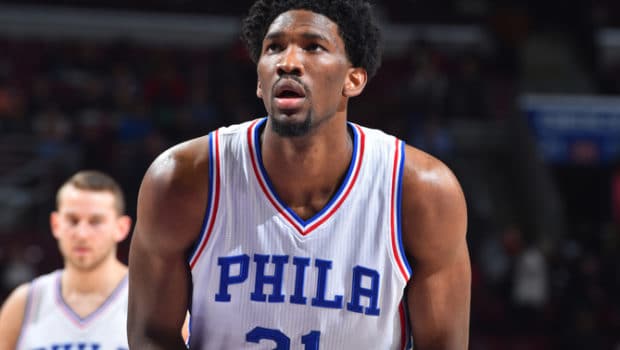 Who says bigs don’t matter in the NBA?

Joel Embiid had 22 points, including four late free throws, to lead the Sixers over the Miami Heat 101-94 last night at the Wells.

Hassan Whiteside set a career high with 32 points while reaching double digits in rebounds for the 13th consecutive game to start the season. Whiteside, who entered leading the NBA with 16.2 boards per game, finished with 13.

“Around the league there’s a lot of young big men, and I think we’re starting to come back,” said Embiid, who played 23 minutes. “So one thing I told him is keep killing it. As big men, we all want each other to do good. I’ve always studied him in the past. It’s always been a big man league, so I want it to stay like that.”

Gerald Henderson added 19 points and Jahlil Okafor had 15 for the 76ers, who won their fourth straight home game. The Sixers (4-10) has lost 21 in a row on the road.

Embiid has made an early case for Rookie of the Year despite missing two seasons with a foot injury. He set a career high with 26 points in a 120-105 win over Phoenix on Saturday night and followed that up with yet another strong game.

He was serenaded with chants of “MVP! MVP!” late in the game from the home crowd, which hasn’t had much to cheer about in the last few seasons during the Sixers’ rebuilding process. But Embiid has given Sixers fans reason to hope.

“Philly loves that guy,” Whiteside said. “I’ve never seen excitement like that. They love that dude. I was amazed.”

The teams were close throughout the second half. Henderson’s corner 3-pointer gave the Sixers an 85-80 cushion with 8:16 remaining. Whiteside re-entered shortly after that shot and helped Miami tie it at 89 with 4:43 left on a tip-in.

Philly responded with nine of the next 11 points, capped by Embiid’s two free throws with 2:27 left that gave the 76ers their biggest lead to that point, 98-91.

“There’s a spirit he has at the end of games and on the bench that reflects toughness and a growing desire,” Brown said of Embiid.