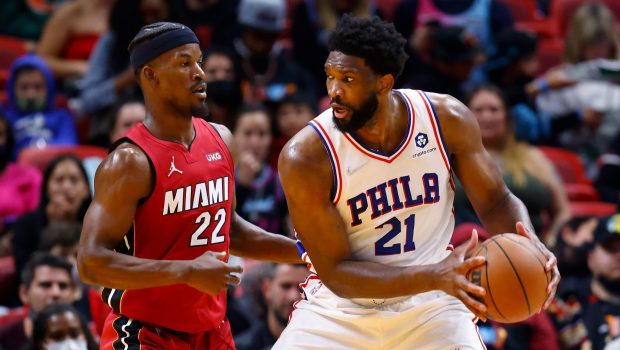 The Sixers just announced their first good news since they bounced the Raptors last Thursday in game 6 of the playoffs.

Joel Embiid has cleared the NBA’s concussion protocol and participated in the this morning shootaround ahead of Game 3 of the Eastern Conference semifinal tonight against the Miami Heatt.

Embiid, who missed the first two games in Miami — both 76ers losses — after suffering a right facial fracture and concussion when he was hit in the head by an elbow from Toronto Raptors forward Pascal Siakam in Game 6 of Philadelphia’s first-round series victory, remains listed as out for Game 3, but the team said his status could again change between now and game time.

With the concussion protocol behind him, Embiid still needs to be cleared to play through the facial fracture, which would require him to wear a mask as he did in 2018.

There’s optimism Philadelphia 76ers star Joel Embiid will return tonight in Game 3 vs. Heat, sources tell @TheAthletic @Stadium. He has been fitted for a mask and will need to feel comfortable before green light. One of the NBA's great play-through-pain efforts recently.

76ers All-NBA star Joel Embiid has cleared concussion protocols. Dealing with orbital fracture and a torn ligament in thumb, Embiid is doing everything possible to be available to play in Game 3 tonight vs. Miami.