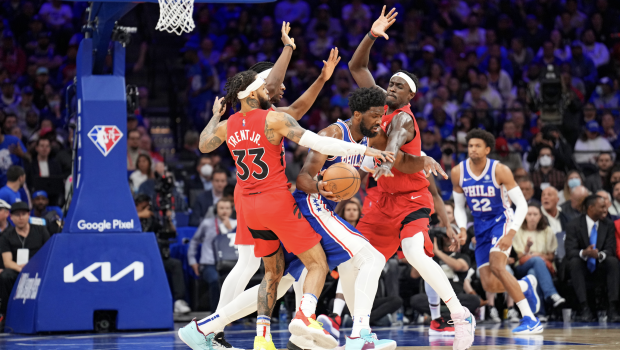 The Sixers had a chance to close out the Raptors last night in game 5.

But they gave no effort, had very little offense and played awful defense.

Reminding us of another team in gtown:

WHEN DID THE SIXERS BECOME THE FLYERS?

No team has ever blown a 3-0 advantage and lost a playoff series.

But the Sixers do not look like a team that can win on the road.

Joel Embiid had 20 points and 11 rebounds playing with a thumb injury. James Harden scored 15 points on 4-of-11 shooting.

The next season, Rivers was in Philly — and the Sixers lost three games at home as the No. 1 seed and were eliminated in the second round.

“We never brought the fight to them at the beginning of the game, really,” 76ers forward Tobias Harris said.

The Sixers finished the first half with 10 turnovers and shot 35% from the floor. Philly’s last bucket in the first quarter was one for the blooper reel: Matisse Thybulle’s missed shot bounced off the rim and was accidentally tipped in by Precious Achiuwa.

“They were the tougher team all night, they were more physical all night,” Rivers said. “I don’t think it was the second quarter. I thought it was throughout the game.”

The 76ers were booed off the court, their play a bleak reminder of recent postseason disappointments.

“We’ve generated really good shots most of the series,” Raptors coach Nick Nurse said before the game. “We haven’t shot very well yet. I told the guys today, today would be a good day to go ahead and start making some of those open shots.”

The Raptors listened, hovering around 50% for most of the game. They also controlled the boards and scored 20 points off 16 turnovers.