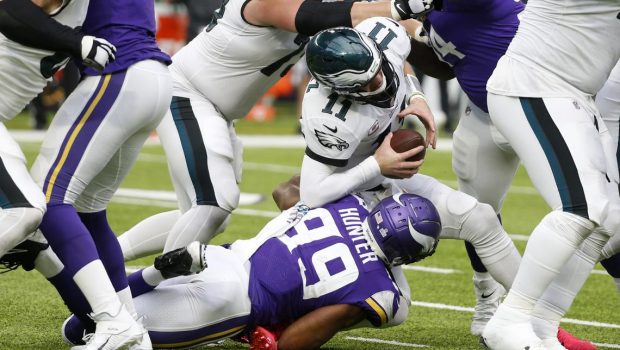 EMBARRASSING EAGLES GET A WELL-DESERVED ‘F’ FOR LOSS TO VIKES!

The Eagles defense put forth an embarrassing effort in this one, allowing Kirk Cousins and Stefon Diggs to to have their way against Rasul Douglas in the second quarter.

A questionable head coaching day from Doug Pederson made matters worse as he tried a fake field goal attempt down 24-10, costing the Eagles three points before half. Pederson also ran a screen to Alshon Jeffery on third-and-3 at the Vikings’ 21 with the Eagles trailing 24-17 midway through the third quarter, a play he previously ran twice earlier in the game for minimal yardage.

Carson Wentz (above) played well, but dropped passes plagued him and forced the Eagles quarterback to do too much at the end. Just a poor performance overall from the Eagles, especially on defense.