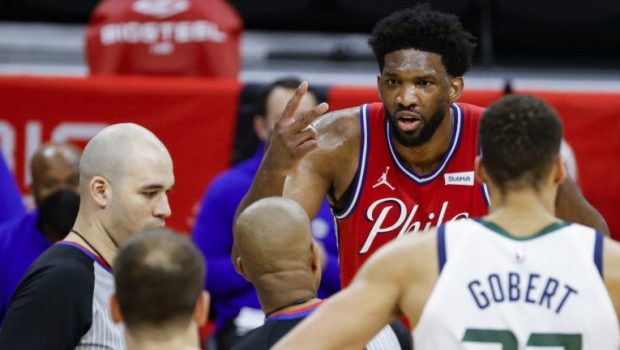 That’s what Sixers center Joel Embiid should be considered after he personally dismantled the Utah Jazz last night in a battle of the NBA’s two best teams, according to their records.

And Embiid seemed to be psyched by playing against Rudy Gobert.

Embiid, who buried the game-tying 3-pointer with 6.5 secs left in regulation, told ESPN’s Jackie MacMullan in December that Gobert shouldn’t have been third-team All-NBA last season over him. He also has said repeatedly he wants to win Defensive Player of the Year — an award Gobert is favored to win this season — and took exception to local media members saying he was “scared” of playing against the Jazz big man after missing Philadelphia’s loss in Utah last month with a back injury.

“As we saw tonight, it looks like I was very, very scared of him,” Embiid said, his voice dripping in sarcasm. “So, yeah, keep talking.

“I want to dominate. On the offensive end, but mainly on the defensive end, because that’s the goal I set for myself at the beginning of the year … those are the matchups that you want to go out there and just dominate and prove to everybody that, as a team, that we have a great team, and, individually, you should be up there when it comes to those rankings and stuff.”

Embiid took 13 foul shots while the Jazz took 19 as a team, one of several things that led up to Jazz star Donovan Mitchell being ejected and multiple Utah players criticizing the officials after the game. Embiid was also everywhere defensively, repeatedly breaking up lobs to Gobert at the rim and, on one play, stopping a Mitchell drive only to immediately jump back up and block a Gobert dunk attempt.

But for Embiid, the lack of respect he got in awards voting last season, after the Sixers exited the playoffs in a first-round sweep by the Boston Celtics, has been a source of motivation he has talked publicly about going back to the preseason.

He specifically, however, singled out Gobert as a source of frustration for being selected as the third-team All-NBA center ahead of him.

“I agree that Anthony Davis had a better season than me,” Embiid told MacMullan in December. “[Nikola] Jokic? That’s debatable. But Rudy Gobert? No offense, but he [averaged] 15 [points] and 13 [rebounds] and I had my 23 and 12, and that’s kind of a big difference. I think my numbers were better. But people didn’t want to vote for me because our team didn’t do well.

“That’s OK, because I will use it to motivate me so there is no chance that anyone can make that mistake again.”

When asked after Wednesday’s game if that snub played any role in his performance, he didn’t try to hide it.

“That’s pretty fair,” Embiid said. “But what motivates me is to win the game. Without winning, you know, you’re not part of those conversations when it comes to Defensive Player of the Year and MVP and all that stuff. That’s the first thing. I want to win. That’s all I care about.

“The past is the past. It’s unfortunate the way things happened last year when I wasn’t on there. … It plays a huge role in my mentality this year, just wanting to destroy everything in my path. I’m playing against a lot of great players every single night. They’re really good at what they do. But wherever I’m needed to get the job done, defensively and offensively, that’s what I’ve got to do.”

Embiid, who will start Sunday’s All-Star Game in Atlanta, is having what easily is the best season of his career, averaging 30.2 points, 11.6 rebounds and 3.3 assists. He is one of the leading contenders for the MVP award, as Philadelphia enters the All-Star Break with a half-game lead over the Brooklyn Nets for the best record in the Eastern Conference.

But, after several games recently, Embiid has repeatedly said he’s more interested in winning Defensive Player of the Year than MVP — though, to be fair, he won’t be turning that honor down if it winds up coming his way.

And while Embiid said multiple times Wednesday that teammate Ben Simmons also deserves to be in the mix for the defensive award — speaking before the game, Sixers coach Doc Rivers said he believes Simmons should be favored, ahead of Gobert, for it — Embiid said he is focused on winning the honor because he has had that as a goal since entering the NBA.

“When I came into the league, I never thought I would be that good offensively,” Embiid said. “I always focused on the defensive side, and that’s always been my goal to win it. It’d be nice to do it, but like I said, that’s been my focus coming into the league, and obviously the scoring and the offensive side has taken over.

“I keep going back to the same thing — you can’t be in those conversations without winning. Right now, we’re winning, we’re first in the East, we beat the best team in the league. I got a bunch of great teammates that are doing a great job. You see [Sixers teammate Tobias Harris], that’s why I’m preaching for him to be an All Star, because you look at nights like tonight, he dominated in overtime. And you know, as a team, we just play all well together, we move the ball, and we defend well.”