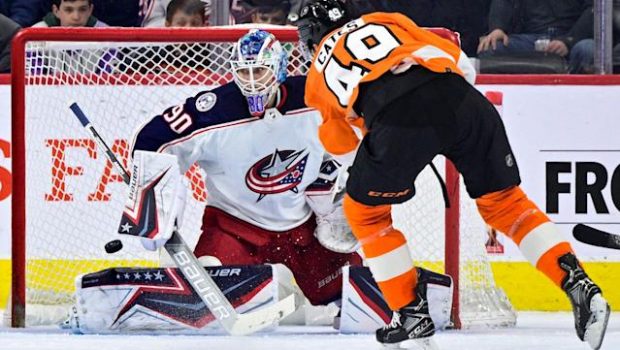 ELVIS WAS IN THE HOUSE, AND AWFUL FLYERS LOST THEIR 48TH!

Noah Cates broke through with his first NHL goal for the Flyers late in the period to cut it to 2-1. The Flyers selected Cates in the fifth round of the 2017 draft, but he elected to stay in school. He joined the Flyers last week after Minnesota-Duluth was eliminated from the NCAA Tournament. He led the school to the 2019 national championship and had 99 points in 139 NCAA games.

Cates was named the alternate captain for Team USA at the Olympics.

“It’s been a lifelong dream to score that goal and it was a pretty big goal for us,” Cates said. “We’ve been playing pretty well this period and to get on the board is huge.”

The Flyers tied it at 2 in the second on James van Riemsdyk’s 18th goal of the season. The assist went to Ronnie Attard for his first NHL point.

That marked four straight goals with a first NHL assist or goal.

Merzlikins stopped 19 shots in the first period and 17 in the second to keep Columbus in the game.

The Flyers pulled Hart with 1:48 left and not even the man advantage could help them avoid their 48th loss of what is going down as the worst season in franchise history.

“Sometimes you play better than the other team and don’t get the win,” Flyers defenseman Ivan Provorov said. “We’re not finding ways to win and we’ve got to get better at that.”