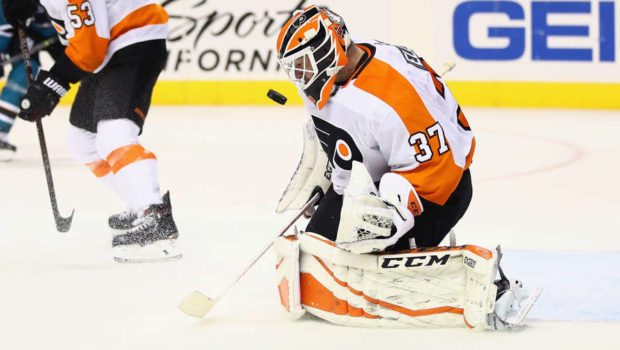 ELLIOTT IN GOAL TONIGHT AS FLYERS SKATE WITH THE DUCKS!

The Flyers have split their first two games on their California road trip to open up the season as they beat the San Jose Sharks on opening night before losing the next night to the LA Kings.

And they will be out for their second win with a strong outing against the Ducks.

The Orange and Black should keep them in the running for a playoff spot in the Eastern Conference, but in order to be considered a top end contender out of the Metro division they are going to have to find a way to tighten up in the defensive zone and keep some of the league’s top offenses at bay.

Philly is expected to send Brian Elliott to the crease as he will face off against John Gibson who remains the top option in Anaheim despite some solid showings from Jonathan Bernier a season ago.

The Ducks meanwhile rallied back from a slow start on opening night and rallied from a 4-1 deficit to win 5-4 over the Arizona Coyotes and they will be out for another strong effort at home here against a Flyers side playing their third game in four nights on the road. Anaheim bowed out to the Nashville Predators last season in the Western Conference final and while a loss like that can take its toll on a team they have the group to go on a run in the West and finally break through to get back to the Stanley Cup final this season.

The Flyers are 3-7 in their last 10 Saturday games and 10-25 in their last 35 against the Pacific while the Ducks are 20-9 in their last 29 overall and winless in their last four following a win. Philly took down the Sharks on opening night but the Ducks match up well with them and I expect they get a victory at home.