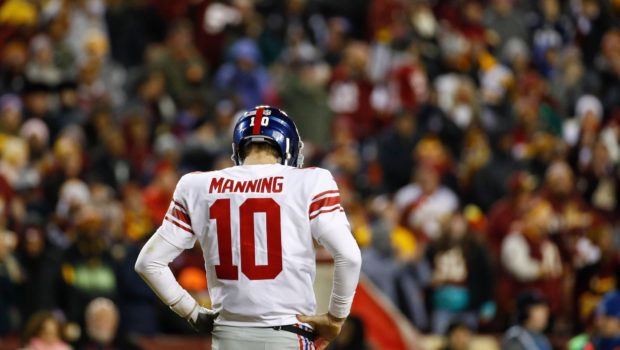 Eli Manning, one of just 12 quarterbacks to win two or more Super Bowls, has been benched by the New York Giants Sunday and will be replaced Sunday by Geno Smith.

Manning has started every Giants game since Nov. 21, 2004, a streak of 210 consecutive regular-season games that ranks second on the quarterback career list to Brett Favre’s 297. Manning is not expected to play Sunday against the Oakland Raiders, with the team choosing to focus on Smith and Davis Webb, whom the Giants took with the 87th pick in this year’s draft.

“Geno will start this week,” coach Ben McAdoo said in an article on the Giants’ website. “Over the last five games, we will take a look at Geno, and we will also give Davis an opportunity.”

While Smith wore out his welcome quickly as a member of the Jets, both on and off the field, his promotion will nevertheless make the Giants the 32nd and final NFL team to start a black player at quarterback, 49 years after Marlin Briscoe became the first, with the Denver Broncos. Smith will also be the first quarterback to start for both the Jets and Giants.

The Giants, who fell to 2-9 with a loss to the Redskins on Thanksgiving, have struggled on many fronts, but Manning was particularly ineffective in what could be his final start for the team, completing 13 of 27 passes for 113 yards and an interception. This has not been Manning’s worst season statistically, but at 36 years old, with his days of being able to will his team into contention seemingly behind him, the Giants felt it was time to look at other options.