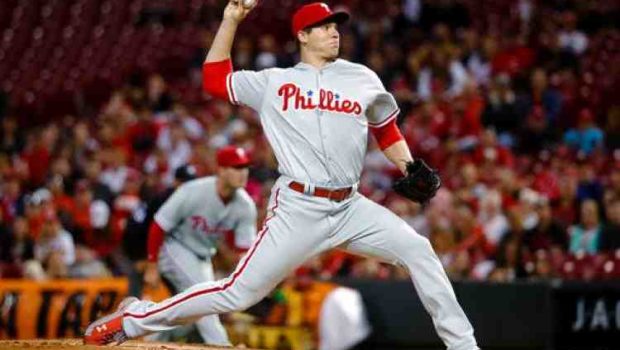 EICKHOFF A HERO, PHILLIES BATS A ZERO IN 2-0 LOSS TO REDS!

Brandon Finnegan and Jerad Eickhoff exchanged zeros for 6 1/2 innings, and then Joey Votto’s leadoff home run in the bottom of the seventh helped give the Reds a 2-0 victory over the Phillies on last night at Great American Ball Park.

“Joey got everyone excited with the homer, and they had been pounding him and throwing the ball close to him. When they came in with the breaking ball on the second pitch, Joey got it,” Reds manager Bryan Price said. “They’re all important, but that second run certainly made a huge difference for us.”

The two-run inning made a winner out of Finnegan, who endured a rocky top of the first following a 50-minute rain delay with a walk and two-out single. But he retired his final 19 batters in a row, allowing just one hit and one walk while striking out nine over seven frames on 88 pitches. More >

Eickhoff finished with two earned runs on five hits, one walk and six strikeouts over 6 2/3 innings.

“He pitched his butt off and gave us every chance to win,” Phillies catcher Cameron Rupp said. “It [stinks] that it worked out the way it did.”