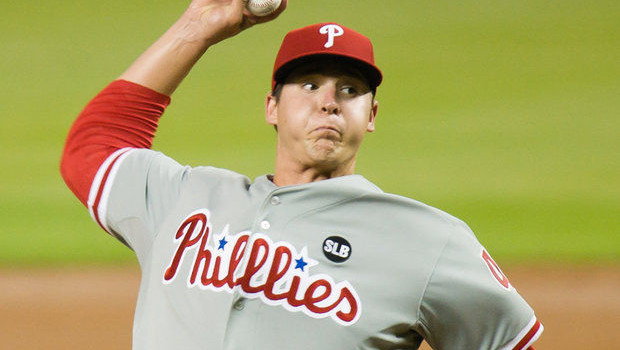 EICKHOFF, WHO CAME TO PHILLIES FOR HAMELS, PITCHES 7-1 VICTORY!

Phillies fans might have found a reason to love the Cole Hamels trade.

Jerad Eickhoff pitched six scoreless innings and drove in two runs in his major league debut to help the Phillies to a 7-1 win over the Miami Marlins Friday night.

Eickhoff (1-0), a 25-year old right-hander, was one of six players acquired from Texas in the Cole Hamels trade on July 31. He allowed five hits and walked one while striking out five. He threw 52 of his 75 pitches for strikes.

Ryan Howard had three doubles and drove in two runs and Odubel Herrera had two hits and scored twice for the Phillies.

The Phils broke a scoreless tie in the fourth inning scoring four runs on four hits off of Kendry Flores (1-2), who was making his first career start. Herrera’s single and Freddy Galvis’ sacrifice fly put the Phillies on top 2-0 before Eickhoff’s two-run single.

Flores, who had six relief appearances to his credit, was solid in the first three innings allowing just one baserunner before unraveling in the fourth. He allowed five runs and seven hits in five innings.

Marlins’ left-fielders Cole Gillespie, who left the game in the sixth with a sore left wrist, and Dietrich combined for three errors.

The Marlins were unable to cut into a 4-0 deficit when Marcell Ozuna doubled off the left-field wall in the fourth sending Justin Bour home, but Bour was thrown out at the plate on a throw from cut-off man Galvis and the tag was secured by catcher Cameron Rupp.

Howard had RBI doubles in the fifth and ninth and Galvis scored in the sixth on Dietrich’s fielding error.

Dietrich’s home run in the seventh put the Marlins on the scoreboard.