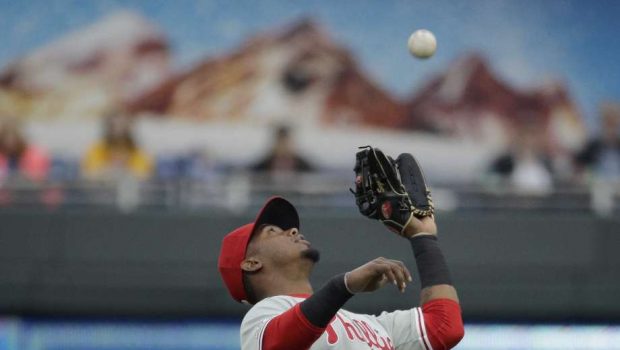 EFLIN LOOKS LIKE AN ACE, AND 1ST-PLACE PHILLIES KEEP PACE!

Zach Eflin became MLB’s first hurler with two complete games and the Phils breezed to a 7-0 win at Kansas City.

This is Eflin’s second career shutout and first since July 22, 2016 in his eighth major league start.

Eflin (5-3) allowed four hits, struck out seven and walked none while throwing 110 pitches.

“There’s so many guys that pitch away from contact in this game,” manager Gabe Kapler said. “He’s fearless. He’s attacking the zone with all of his pitches.”

“I think it goes a long way when a guy trusts his catcher the way Zach trusts me and that didn’t come all at once,” catcher Andrew Knapp said. “That’s been a long time coming with a lot of games played together, but we’re definitely on the same page. All I’m doing is calling the pitches. He’s the one executing it, so all the credit goes to him.”

“He knows what I’m best at, probably more so than I do,” Eflin said.

Odubel Herrera doubled and tripled, and Andrew McCutchen and Rhys Hoskins each drove in two for the Phils, who also worked seven walks, with every starter reaching base at least once.