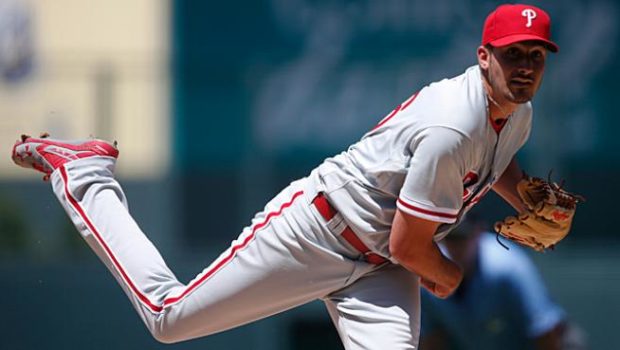 Phillies pitchers could open a wing in a local hospital.

Right-hander Zach Eflin had season-ending surgery to repair the patellar tendon in his right knee. He will be immobilized for the next six weeks, which will allow a stress fracture in his right foot to heal. Eflin is expected to have the same surgery on his left knee in six weeks.

“It seems like that’s where it’s headed,” Phillies general manager Matt Klentak told MLB.com about the second surgery. “If everything proceeds according to plan, he should be no problem for spring training. We’ll see.

“The hope here is that it’s going to alleviate the problem and that he’s not going to have to deal with it. And in just talking candidly with Zach last night, while not excited to undergo the knife today, he was pretty excited about the possibility of coming to Spring Training next year pain-free for the first time in his life.”

Eflin, 22, said he has had knee problems since he was 10 or 11 years old, which the Phillies said they have known since they acquired him from the Dodgers in December 2014 in the Jimmy Rollins trade. But they also said they also did not believe two knee surgeries were an eventuality.

“There was not an imminent surgery looming when we talked about Zach Eflin in spring training, for example,” Klentak said. “But we know that it’s something he’s battled and knew it was a possibility that one day this would come, but didn’t know if or when, specifically.”

Before the Phillies placed Eflin on the 60-day disabled list, they placed right-hander Aaron Nola on the 60-day DL on Wednesday because of a low grade sprain of his UCL and a low grade strain of his flexor pronator tendon. He received a PRP injection into the elbow Monday. Nola will not throw for four weeks.

The Phillies hope to see improvement at that time. They said surgery for Nola is not a consideration at this point.

“Would we like all these guys to pitch a full season and reach certain benchmarks and accomplish all their goals? Well, yeah,” Klentak said. “We want that for all of our players. A lot of our guys have made a lot of progress this year. Injuries to pitchers, that’s part of how baseball works.”

“I’m not overly concerned about Nola ,and I’m not concerned about Eflin, because he’s had that for a long time, and I think with it behind him now and getting it taken care of, he’s got to feel good about that,” Mackanin said. “I expect him to be 100 percent, probably better than this year. Nola, time will tell. Perhaps the time off will really help him.”