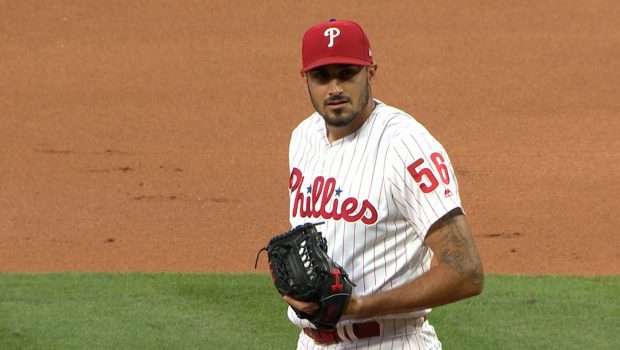 EFLIN FAILS PHILS AGAIN: WHEN WILL THEY ADD A STARTER?

When are the Phillies going to stop fooling themselves about Zach Eflin, who failed them again last night?

Eflin allowed three runs in 3 2/3 innings in a 5-3 loss to the Padres at Citizens Bank Park.

“It’s my job to come in, fill a role, put up zeros and put the team in the best position to win,” Eflin told MLB.com.

Eflin opened the season in the rotation, posting a 2.83 ERA through 14 starts. But after he had a 10.46 ERA in six starts from June 24 to July 27, the Phillies moved him to the bullpen. He rejoined the rotation last night because Jake Arrieta is having season-ending surgery before the end of the month to remove a bone spur in his right elbow.

Arrieta had a 5.34 ERA in his final seven starts before he made the announcement. It should not be difficult to best that effort, but time will tell.

Eflin had runners on base in every inning, and it finally caught up to him in the fourth. He had a runner on first with two outs, but he allowed a single to Padres pitcher Dinelson Lamet to keep the inning alive. Eflin had an 0-2 count before allowing the hit on a 3-2 fastball. He then allowed a single to Manuel Margot on an 0-2 slider to score San Diego’s first run.

Josh Naylor ripped a double on a 2-2 fastball to score two more runs and tie the game.

“Just horrible two-strike pitches,” Eflin said. “It’s something that I really need to get on top of.”

“I see no reason why I shouldn’t throw more sinkers, especially if I’m trying to go deep into games,” Eflin said. “It’s been something we’ve been talking about. It’s been pretty productive from my relief appearances. I think for the most part I really wanted to get early contact and really stay in the game as long as I could.”

Eflin generated only one swing and miss Saturday. He had gotten no fewer than six in any of his previous 20 starts this season.

“I don’t care about swings and misses,” he said. “I care about outs and going as deep as I can in the game. I think swings and misses are a plus, when you can do it. I’m not saying that they’re not important, but I think it’s definitely more important to get guys out with fewer pitches as opposed to just going for the swing and miss every single pitch. It also takes a toll on your body.”

Eflin had talked about feeling fatigued following a start in Atlanta on July 4 and a start in Pittsburgh on July 20. Ideally, it sounds like Eflin would like to throw more sinkers because he hopes to get more outs early in the count, which will preserve his body and allow him to pitch deeper into games.

Hey, that philosophy has worked for plenty of pitchers. But can it work for Eflin?

“We saw some good two-seam fastballs,” Kapler said. “He’s working on that pitch a little bit. We felt really good about it inside to right-handed hitters.”