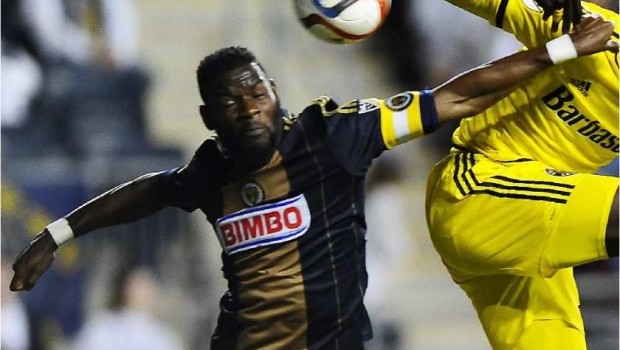 You’ve got to hand it to the Union’s faithful fans who sat through a rainstorm and a stiff wind Saturday and were rewarded.

Maurice Edu punched home a rebound from in front of the Montreal goal (above) in the 76th minute and the Union salvaged a soggy 2-2 draw with the Impact.

After a Philly corner kick, the ball bounced outside the box and Fabinho fired a shot that goalkeeper Evan Bush stopped but couldn’t control. Edu was able to settle the ball and strike home the tying goal.

Montreal (5-6-3) tied it when Ignacio Piatti right-footed a shot from outside the box into the bottom right corner.

Former Union forward Jack McInerney put the short-handed Impact ahead just minutes after Patrice Bernier was sent off after getting a second yellow card. McInerney settled a pass fromAndres Romero at the top of the box and fired a shot into the bottom right corner.