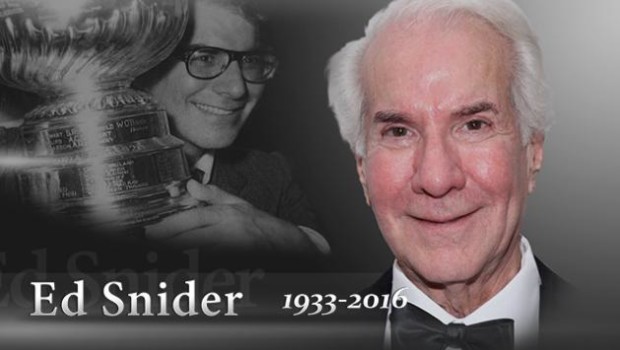 ED SNIDER REMEMBERED: ‘TOUGH AS NAILS OUTSIDE … SOFT INSIDE’

They came to celebrate Ed Snider yesterday, and even though the Wells Fargo Center was a hall too big for this one, the late Flyers owner was recalled by friends, family members and business associates during the approximate two-hour long celebration as a man of fairness, generosity, family … and for that fiery, competitive spirit which branded his veneer.

“Tough as nails on the outside,” said speaker Drew Katz, “soft on the inside.”

It was what lay beneath the surface that everyone wanted to share stories about.

“Even though we knew Mr. Snider was passing and had time to prepare ourselves, it really hurt,” franchise icon and current senior vice-president Bob Clarke said of the owner that embraced him long ago, “and it’s going to hurt us for a long time losing him.”

Clarke had several anecdotes that brought to life his memories of Snider as not only a competitive entrepreneur who grew to love hockey and his team on a personal level, but one who never failed to show that soft side of his complex personality.

In one story, Clarke talked of missing the playoffs in 1972, when goalie Doug Favell couldn’t save a near 60-foot shot by Buffalo’s Gerry Meehan with four seconds to go in the season’s final game. Clarke said Snider came into the locker room and went to every player telling them to keep their heads up, because, “this was going to make us a stronger team. … Two years later, we won a Stanley Cup.”

“Everything I have about Mr. Snider is all good,” Wayne Simmonds said before the ceremony. “Obviously, that’s why we’re here today, to celebrate his life and all the good accomplishments that he made and that the rest of us are just trying to live up to. Mr. Snider’s a great human being and I think you can really see that by the community involvement that he had.”

There were members of the community that were allowed to enter and view the event in the lower bowl. There were also the Comcast-Spectacor group of employees at the Center who came in and sat along with other invited guests on the floor area. All told, perhaps about 2,500 people or a little more attended.

The speakers represented a cross-section of Ed Snider’s life. Lauren Hart sang “God Bless America” in toned-down fashion, Comcast CEO Brian Roberts talked of attending the Soviet Red Army game as a teenager in 1976, then his quiet, inner thrill when he became a business partner with Snider.

“From the beginning, Ed was the perfect partner,” Roberts said. “Spectacor became Comcast-Spectacor and grew all over the country through his entrepreneurial instincts. As the years passed, Ed and I became close friends, and he became a trusted advisor to my father and me. It may surprise a few of you, but Ed was a great listener. He listened to our dreams, encouraged us to grow and to evolve Comcast.”

There was another longtime business partner, Jack Williams, and noted financier and philanthropist Michael Milken, a close friend even when Milken was involved in the “junk bond” scandal in the 1980s.

There were NHL Commissioner Gary Bettman, Philadelphia mayor Jim Kenney, and Drew Katz — the son of the late Lewis Katz, who was Snider’s best friend in recent years as well as a former Inquirer and Devils part-owner.

There was Bob Clarke as the only player’s representative to speak, though the arena was full of Flyers alums and NHL luminaries such as Wayne Gretzky. And there was Virlen Reyes, who hailed from Kensington and said at the age of 13, “crime was a big part of my five-day forecast, neighborhood drug deals were my basic studies in current events and economics, and the increase in dropout rates were my daily lesson in statistics. I had few friends and even fewer caring adults as role models. Fortunately for me, this all changed the day I found out about the Ed Snider Youth Hockey Foundation.”

She would be the first of the program’s student-athletes to go to college.

Snider’s interests were widespread, his passion mostly centered around his hockey team. But the Foundation grew to become his legacy, as he knew it would be.

“Though he had many interests, among them art, tennis, the writings and philosophy of Ayn Rand, the Flyers were Ed’s passion,” Bettman said. “…He had considerable business success, but it was the lives in the community he helped touch, to change for the better, to save, through the Ed Snider Foundation, through Flyers Charities. Those were the things that made Ed feel rich.”

It was easy to see why the six Snider children who took the stage last would have felt at home here. Daughter Lindy Snider told of doing homework in the bowels of the Spectrum before games, helping the maintenance crew change over the floor; how she and all her siblings worked at the place in one capacity or another, and play games of floor hockey with the players.

“We used to feed the (stray) cats that lived (inside the Spectrum),” Lindy said, but her father would ask her not to. Why? “Because they’re there to kill the mice,” she said.

The ceremony came to a conclusion with singer-songwriter Jacob Snider playing piano and singing, “It’s a Wonderful World,” in tribute to his grandfather, a man who could stir many emotions in those he met, those he cared for.

“Just his passion. Not just for hockey, but for life, community, the city, his family and the organization,” Claude Giroux said in summary of Snider. “His passion for everything he did in life, he gave everything he had and he was just fun to be around.”