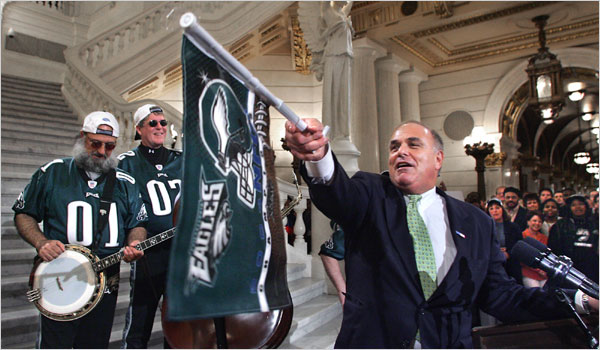 Anyone who has lived in Philly for 40 years, when Ed Rendell first came to the public’s consciousness as district attorney, mayor and Pennsylvania governor, knows that his greatest passion isn’t politics, but sports.

He does tend to overlook the foibles of our home teams, but that doesn’t mean he’s wrong about Tim Tebow. Here’s an excerpt from last Saturday’s column in the Daily News:

For more than 2 years, the so-called experts have concluded that Tebow cannot be a winning NFL quarterback, saying he can’t make coverage reads and isn’t an accurate enough passer. I always found this conclusion to be somewhat curious, considering that in four seasons at college, playing in big-time games for Florida, he completed 66.4 percent of his passes, threw 88 touchdowns and had only 16 interceptions. He led the Gators to two national championships and won the Heisman Trophy. I watched him play against Oklahoma in one of those national championship games and his passing was just incredible. He threw the ball in small spaces for multiple receivers, including one Riley Cooper.