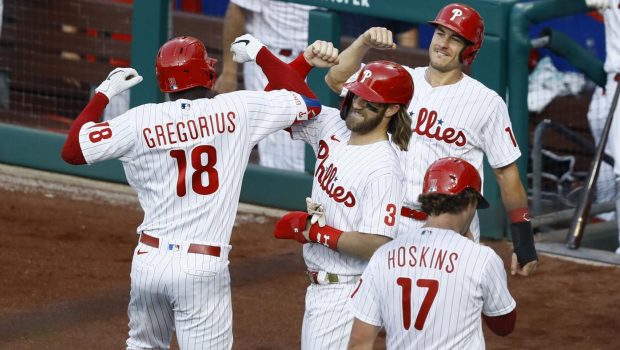 J.T. Realmuto homered and knocked in three runs and Roman Quinn and Jean Segura also blasted homers as the Phillies rebounded from Sunday’s doubleheader sweep with a 13-8 win.

Quinn had three hits, the first time the Phils history they had at least four home runs and 10 runs in the first two innings, according to the Elias Sports Bureau.

Aron Nola (1-1) tossed eight strong innings, giving up two hits and one run and striking out 10 for the 14th double digit strikeout performance of his career. The Phillies snapped a nine-game losing streak in his starts, dating to Aug. 20, 2019.

The Phillies jumped out to a quick 3-0 lead in the bottom of the first inning when Phil Gosselin and Rhys Hoskins each singled. Harper then blasted a three-run homer to center field.

In the second, d’Arnaud hit a solo homer to left-center to close the Braves within 3-1.

Quinn responded in the second with a solo home run, his first of the season, for a 4-1 Phillies lead. Realmuto later added an RBI single with the bases loaded for a 5-1 advantage.

Newcomb was lifted and Gregorius hit a towering grand slam to right off reliever Robbie Erlin for a 9-1 lead. It was Gregorius’ sixth career grand slam. Segura then followed with a solo homer to right for a 10-1 advantage.

Realmuto added a two-run homer to left in the fourth off Erlin for a commanding 12-1 lead.

The Braves produced seven runs in the ninth, six of them against Nick Pivetta. Nick Markakis drove in a run with the 500th double of his career. Riley lofted a two-run homer off Trevor Kelley to cap the comeback attempt.