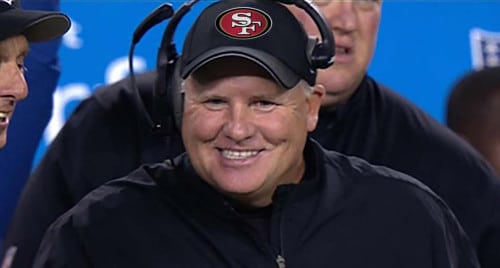 EAGLES/NINERS WASHOUT CHIP KELLY TO PATS? DON’T BANK ON IT!

Speculation about Chip Kelly, who set an NFL record by being fired as a head coach twice in 367 days — first by the Eagles and then the Niners — is amping up.

Albert Breer of MMQB was asked whether there would be a benefit to the New England Patriots having Kelly around for the playoffs.

Breer noted that he wouldn’t expect the Patriots to make Kelly a successor to Josh McDaniels if the New England offensive coordinator were to leave this offseason.

“I don’t think he’s going to be the offensive coordinator, because that’s just not the way Bill works,” Breer said. “If you look at the guys — after the initial wave of Charlie Weis and Romeo Crennel who were kind of more Bill’s peers, it really has been guys who come up through the system who have been the coordinators here.”

Breer said that if McDaniels were to leave for a head-coaching gig, he would expect tight ends coach Brian Daboll or receivers coach Chad O’Shea to take over.

“That said, I think Bill loves these guys who are a little different than him who he can learn from,” Breer continued. “Chips’s one of those guys. Chip didn’t all of a sudden become an idiot. He’s still a very, very intelligent football coach who does things in a very different way than a lot of other people. I think Bill’s always been really welcoming to guys who are football lifers like he is and guys who can kind of bring some different ideas to the table, different ways to attack defenses, a different perspective on the way people have attacked his offense.”

If Kelly is to take a year off from coaching, Breer said he wouldn’t be surprised if Kelly were to be seen around Gillette Stadium from time to time.