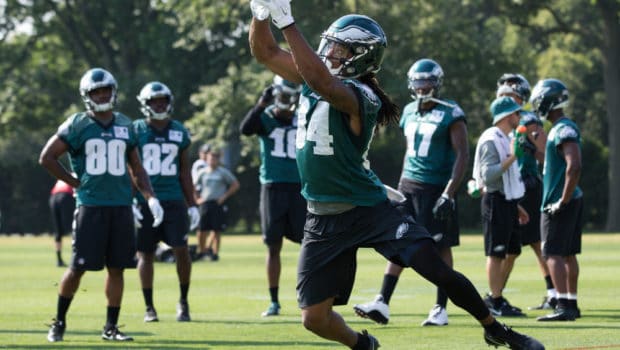 Johnson has taken his place on the second-team offense behind Alshon Jeffery, who hurt his shoulder during Saturday’s practice.

So Johnson got an opportunity to work with the first team. He promptly delivered with two catches across the middle of the field in traffic. This was after he caught two deep passes from Wentz in 3 on 3 matchups during practice.

“I had to step up with whatever happened to Alshon, and I made the most of the reps,” Johnson said after practice.

“You build on your craft and put the best you that you can out there every day,” Johnson explained. “It becomes second nature after repeating it over and over again. The comfort level brings the true player that you are out. You don’t have to think as much. You can just go play, you’re loose. When that happens everything comes together.”

Former receivers coach Greg Lewis had a lot to do with him signing with Birds as an undrafted free agent last year.

“Marcus does a good job. He works hard,” O-boss Frank Reich said. “He’s into it. [He’s] smart. He’s got some speed. He’s got strength. He has the qualities that you’re looking for. So very, very excited about his progress and he’s getting a good look.”