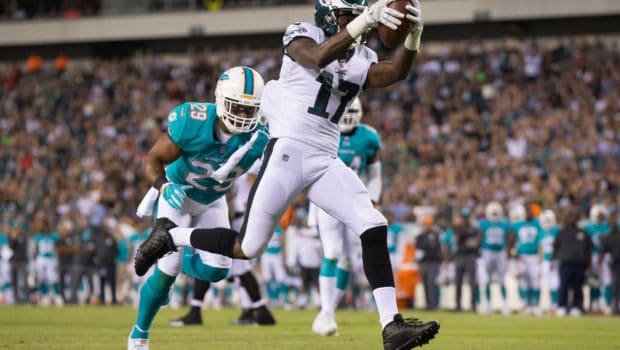 WHY EAGLES’ WR ALSHON JEFFERY IS A FANTASY DRAFTER’S DREAM!

The Eagles have seemingly solved their wideout issues with the additions of Alshon Jeffery and Torrey Smith.

They couldn’t possibly be as bad as they were last season in the pass-receiving department!

Jeffery now finds himself in Doug Pederson’s offense with the second-year QB, Wentz. Typically, Pederson hasn’t done a great job in producing Fantasy-friendly wide receivers. He was the offensive coordinator for the Kansas City Chiefs from 2013-2015 in an offense that was infamous for subpar receiving production.

There is one exception, however, as RotoWorld points out:

Pederson’s Wide Receivers with the Chiefs

Pederson knew how to get the most out of Maclin. The reasoning might simply be that he was Pederson’s most talented receiver during his tenure as the offensive coordinator.

Jeffery is a bigger version of Maclin. He can do a lot of the same things. He can line up all over the field, make flashy catches, has speed to get behind the defense and can be a force in the red zone. Throughout Jeffery’s career, he’s scored 16 of his 26 career touchdowns inside the red zone with eight of those coming from within the 10-yard line.

With the departure of Jordan Matthews, those targets will come a lot easier for Jeffery. Matthews figured to see 100-plus targets, but now those will mainly be spread out between Jeffery, Zach Ertz and the running backs. I’m not buying into Nelson Agholor or Torrey Smith demanding many targets.

Jeffery has dealt with a lot of soft-tissue injuries in the past and had a shoulder strain in camp. The injuries limited him to just nine games in 2015. In an effort to improve his conditioning, Jeffery got caught using PEDs in 2016, which resulted in a four-game suspension.

Jeffery’s 2017 production should look a lot like what Maclin did in that 2015 season when he finished as WR17 in standard and WR15 in PPR.