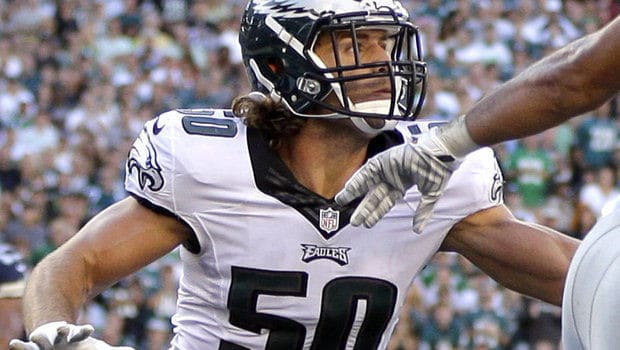 EAGLES WOUNDED: ALONSO, KENDRICKS AT PRACTICE, NOT READY YET

The Eagles’ walking wounded walked back to the practice field Wednesday but were still wounded.

Linebackers Kiko Alonso (above) and Mychal Kendricks were at practice as the Eagles prepared for Sunday night’s game against the Carolina Panthers.

“We’ll test the waters with Kiko and Mychal (Wednesday) and we’ll see,” Davis said. “I don’t anticipate. . .well their day to day. Hopefully, I’ll be surprised.”

Alonso has been out with a knee injury since the second game of the season against the Dallas Cowboys. Kendricks suffered a hamstring injury in the Cowboys’ game, came back and played against the Redskins two weeks later, left early and missed the last two games.

Linebacker DeMeco Ryans, who suffered a hamstring injury in Monday’s 27-7 win over the Giants, did not practice, Wednesday, but Davis said he expects the veteran to play, Sunday.

“We’ll giving DeMeco the day off (Wednesday),” Davis said. “But knowing DeMeco, and the way he handles injuries, he’ll be out there, Sunday. He’s a warrior.”

Defensive end Brandon Bair, who missed the past two games with a groin injury, also retuned to practice.

Cooper was injured during the Giants’ game, but returned.