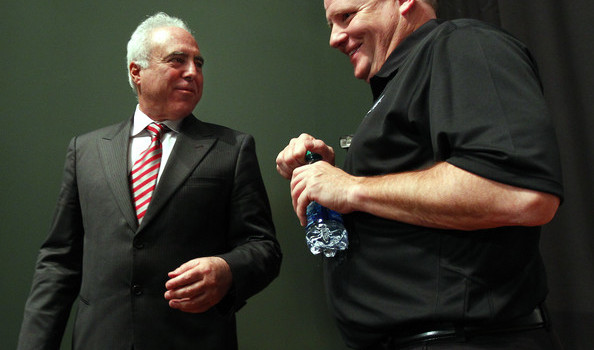 When Jeffrey Lurie (left in photo above with coach Chip Kelly) bought the Eagles from Norman Braman in 1994 for $185 million — with a check co-signed by his mother — it was the highest amount ever paid for a sports franchise in this country.

The National Football League continues to be the most lucrative sports league in the world, according to Forbes’ 17th annual NFL Team Valuation list. The average NFL team is worth $1.43 billion, the highest value in all of the 17 years Forbes has tracked professional football team values. The $1.43 billion average is 23% more than a year ago, the biggest year-over-year increase since 1999.

For the eighth consecutive year, the Dallas Cowboys, worth $3.2 billion, are the league’s most valuable team. The only sports team in the world worth more than the Cowboys is Real Madrid, worth $3.4 billion. During the 2013 season, the Dallas Cowboys posted the NFL’s highest revenue ($560 million) and operating income ($246 million).

For the 2013 season, the average NFL team generated record revenue (net of proceeds used to pay off stadium debt) and operating income (earnings before interest, taxes, depreciation and amortization) of $299 million and $53 million, respectively. Each of the NFL’s 32 teams took in a record $170 million of national revenue, mainly from league-wide broadcasting and licensing fees. The NFL has the highest TV ratings and broadcasting revenue of any U.S. league.

Forbes’ team values are enterprise values (equity plus net debt) based on each team’s current stadium (with adjustments for pending new stadiums and renovations).

The Top 10 Most Valuable Teams in the NFL are: