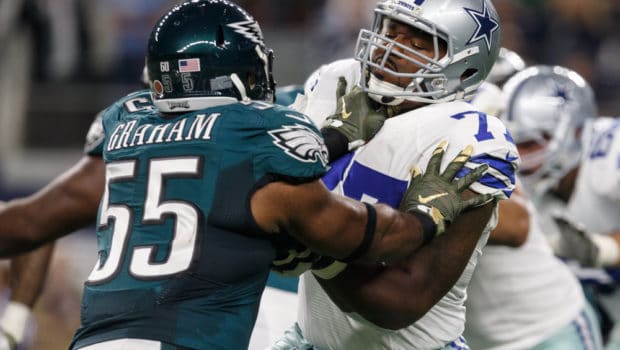 The Eagles’ challenge Sunday night in Dallas just got a little bit easier.

Bell would give the Cowboys their third starting left tackle in three games. Chaz Green started Sunday against the Falcons, and well, you probably know how that ended.

Smith has a groin injury that limited him to working on the side during practice Wednesday and yesterday.

“Tyron had a good day [Wednesday],” coach Jason Garrett said. “He’s going to still work on the side with our training staff [Thursday], and we’ll see how he does with that work.”

The Cowboys have two games in four days and three games in 11 days. It wasn’t likely Smith would play against both the Eagles and the Chargers, so if he indeed misses Sunday’s game, the Cowboys will have to hope he can return for Thanksgiving Day.

The Cowboys already knew when the week started they wouldn’t have weakside linebacker Sean Lee (hamstring) or running back Ezekiel Elliott (suspended) this week.