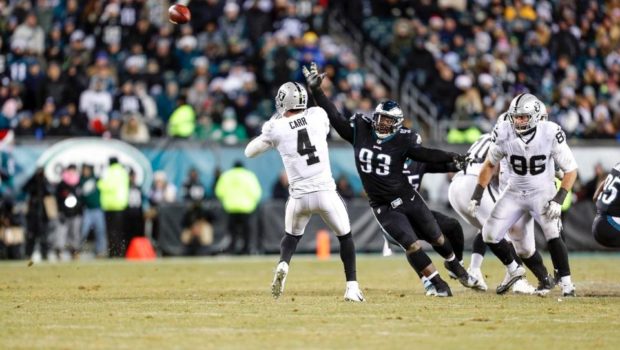 The Eagles-Raiders game last night was hard to watch, what with the turnovers and sloppy play by the Birds, who nevertheless won 19-10 to wrap up home field advantage throughout the playoffs.

But for gamblers, it was especially unnerving:

The Eagles entered the game as 10-point favorite at most books, but some people had them at -8.5, some at -9 and surely some had -9.5. Lines constantly shift.

A Jake Eliot field goal gave the Eagles a 13-10 lead with :27 seconds left. The Raiders sputtered on their first few plays then tried one of those lateral deals, but they lost the ball and the Eagles returned it for a touchdown.

That set the stage for a beat for those who took Raiders +10 and sealed a cover for those who had Raiders +8.5. And if the Eagles simply kick that extra point, the people who had +9.5 take a brutal loss and the +10 bettors have to swallow a push instead of a comfortable cover.

But in a Christmas miracle (for some), Eagles coach Doug Pederson elected to take a knee, so the final score read 19-10. That means those who had the Raiders +10 or +9.5 did, in fact, cover.

Additionally, as the vast majority of fantasy leagues had their championships this week, there are certainly more than a few leagues whose finals were flipped by that late touchdown by the Eagles defense.

This isn’t the first time something like this happened this season. In Week 4, the Chiefs took a Redskins lateral play back for a touchdown to cover the spread and bring the game’s point total past the over/under.

This is why you continue to watch football even after a game is decided. That is, if you’re a gambler or fantasy football player.