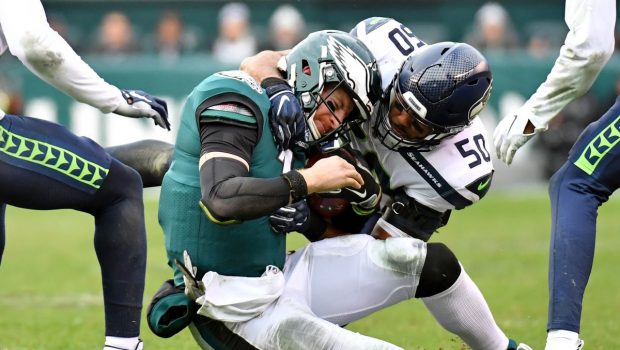 EAGLES WOEFUL O-LINE HAS WENTZ ON PACE FOR A SACK RECORD!

Not to put too fine a point on it.

But the Eagles offensive line has been battered by injuries all season, and last night they fielded their 11th different version.

So, it’s not surprising that Carson Wentz has been running for his life all year.

Houston Texans QB David Carr earned a place in NFL infamy by setting the NFL record for sacks: Carr was sacked an all-time record 76 times in 2002, the first year the Texans franchise existed. He was then sacked 68 times in 2005.

Since Carr 15 years ago, no quarterback has been sacked more than 63 times in a season. But Eagles quarterback Carson Wentz is on his way.

After taking six sacks last night against the Seahawks, Wentz has been sacked 46 times this year through 11 games. That puts him on pace for 67 sacks in a 16-game season.

A big part of the problem has been injuries on the Eagles’ offensive line, but a bigger problem has been Wentz himself, who has regressed markedly in his ability to feel the pressure and get rid of the ball quickly. Wentz just isn’t the quarterback he appeared to be early in his career, isn’t the quarterback the Eagles expected him to be when they signed him to one of the biggest quarterbacks in NFL history. Wentz looks like a rookie playing on an expansion team.