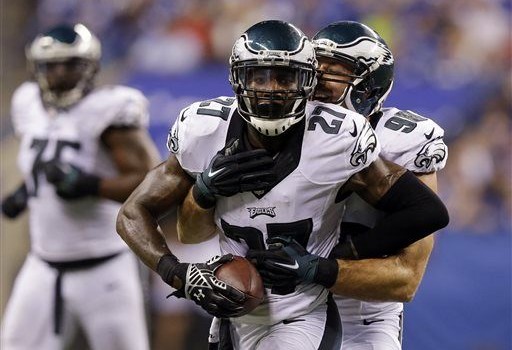 EAGLES’ WIN TURNED ON A HOLD THAT THE ZEBRAS MISSED

Everybody saw Brandon Boykin’s hold on T. Y. Hilton except the officials.

Colts coach Chuck Pagano didn’t hide his anger when he saw the replay on the video board inside Lucas Oil Stadium on Monday night or when he talked about it during his postgame media conference following the 30-27 loss. Hilton on his knees after the hold while Jenkins (above) selebrates his pick.

“I think I had the same view as you did,” he said.

Hilton added, “Yeah, he pulled me down, but they missed it, so it’s cool.”

The real issue on the play was the Colts’ decision to put the ball in the air when it wasn’t necessary. They had the ball third-and-9 at Philly’s 22-yard line with the clock running.

These weren’t the Colts of the past year who needed quarterback Andrew Luck’s arm to win a game. They had success running the ball Monday night. Trent Richardson and Ahmad Bradshaw combined for 149 yards on the ground. Indianapolis could have run the ball on third down, killed some more of the clock and then kicked the field goal to push its lead to 10 points with less than five minutes left in the fourth quarter.

That wasn’t good enough for them.

“We knew we had the field goal in the bag,” Pagano said.

The Colts spent the week planning for different situations, but Philly’s quick-fire offense obviously put some fear into them, so they got greedy in an attempt to go up by two touchdowns.

“Touchdowns are better than three points,” Luck said. “We had been running the ball obviously very well. But I thought we also converted some big third downs throwing the ball. If we can convert that, then we had a good chance.”

Greediness ended up getting the best of the Colts.

Luck thought he had Hilton open, but Boykin grabbed the receiver as he was making his cut on the play. No flag was thrown, and Malcolm Jenkins picked off the pass (photo above).

“I think everyone saw what happened on the play,” Pagano said. “The last thing we said to the quarterback was take care of the ball. If the guy gets tackled, drug down, whatever it was, there’s nothing the quarterback can do about it. Our thinking was wrong.”

In a matter of one bad play call and a no-call by the officials, the Colts went from looking like they were going to pad to their lead to staring at the back of Darren Sproles’ jersey as he took a short pass and raced 51 yards to put the Eagles in the position to tie the game with less than four minutes remaining.

The Colts have played two games and failed to take advantage of their opportunities in each of them. Now they sit 0-2 with their odds of making the playoffs at only 12 percent.

“There’s no falling back on ‘We’re a young team and we’re still learning,'” Colts tight end Dwayne Allen said. “The whole ‘young’ title is out the door. We’re a football team, and we’re an experienced football team. We’ve proven we can win football games, and these first two games are something we’ve proven that we can win and we just haven’t done that. All we can continue to do is work on our craft.”