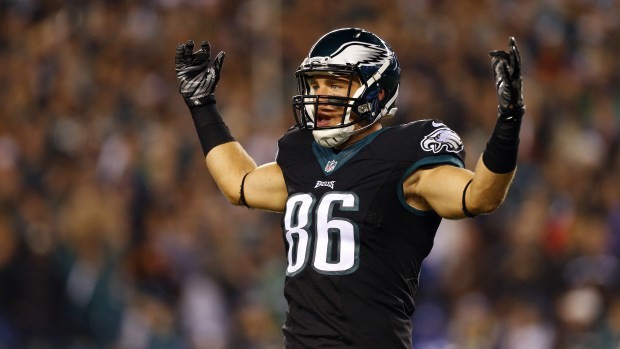 EAGLES WILL WEAR BLACK AGAINST GIANTS BIG BLUE ON MNF!

Why screw around with something that works?

Using that maxim, the Eagles aren’t taking any chances as they prepare for the NFC showdown against the New York Giants next Monday at the Linc.

A year ago Monday, the Eagles wore all-black uniforms for the first time ever and played a game for the record books as they defeated the Giants, 27-0, earning the 36th shutout in franchise history.

The Eagles announced on the anniversary of Black Sunday that they will bring back the all-black uniforms for next Monday night’s game against the New York Giants.

In addition to being a nationally televised NFC East showdown on Monday Night Football, the Eagles will induct linebacker Maxie Baughan and running back Brian Westbrook into the team’s Hall of Fame at halftime.

In last year’s meeting at Lincoln Financial Field, the team recorded 448 net yards of offense on its way to the victory, but the true story of this game was the defense’s shutdown performance.

The Eagles allowed New York into the red zone only one time throughout the 60 minutes, but were able to stop the drive in the nick of time. One a fourth-and-3 from the Eagles’ 3-yard line in the third quarter of the game, Giants quarterback Eli Manning threw an incomplete pass to Victor Cruz, who ruptured his patellar tendon on the play and has not suited up in a game since. The Giants turned the ball over to the Eagles and would not see the red zone again during the game.

The shutout was the first the Eagles successfully completed since the 1996 season – that was also against the Giants – and ended up being the largest margin of victory for the team that year.